Annual awards program honors companies in the industry going ‘beyond the call of duty’ to support our military and their families.

The event, open to all who attend that National Frozen & Refrigerated Foods Association annual convention each year in October, “Recognizes and encourages food retailers and others allied to the trade to go the extra mile in serving our heroes,” according to Johnny Harris, president of Johnny L. Harris Consulting and a contributing editor of Frozen & Refrigerated Buyer.

A Vietnam vet, he notes that “During World War II, 40% of Americans were serving in uniform. Now that number is only 1%, and the remaining 99% of us should find a way to thank support our military, vets and their families for their sacrifice and service.”

Last year for the first time, two non-retailers were also honored, spreading recognition wider throughout the industry. The event is run under the auspices of FISH (Food Industry Serving Heroes), a 501c3 corporation. Through tax-deductible donations from sponsors and supporters in the industry, FISH fulfills its mission to provide active duty military, veterans and their families with wheelchairs, service dogs, financial literacy programs and jobs within the food industry. Proceeds are also used to continue the Retail Patriots event during the NFRA convention, raising awareness of the plight of injured veterans and building participation in “Heroes Dinners” held throughout the country.

Awards presented for going “above and beyond the call of duty” in providing support to our troops, veterans and their families. 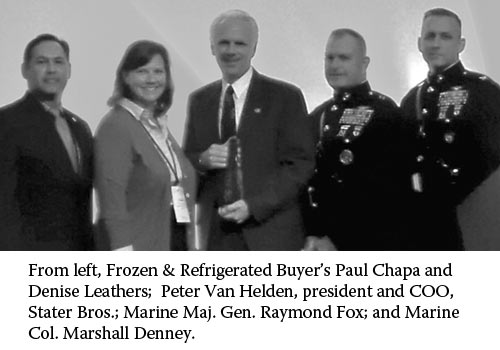 A silent auction run by for Food Industry Serving Heroes (F.I.S.H.), an industry non-profit organization, raised $5,000, which will be used for more wheelchairs and service dogs for returning wounded veterans. Another $1,260 was raised for the Corporal Marshall Denney IV Scholarship Fund. This fund was founded as a tribute to the late corporal, who had been hand-making paracord bracelets to sell with the proceeds going to aid Marines.

Working with the magazine as event co-sponsors were Ruiz Foods, Lindy’s Homemade, Ready Set Cupcake!, the Southeast Association of Frozen & Refrigerated Food Councils, Cargill, General Mills, White Wave, Crystal Farms and Dovetail Promotion Partners. Here is a list of winners, and some of the support they have provided over the past year.

Harris Teeter hosts a “Support Our Troops” donation card campaign to benefit the USO and Wounded Warrior Project. The company participates in Believe in Heroes, with customers supporting veterans by purchasing select products. Harris Teeter runs a Pies for the Troops campaign each Fourth of July week, and has been a Founding Supporter of the Food Industry Serving Heroes Foundation’s Heroes Dinners.

H-E-B Operation Appreciation — a campaign to honor service members, veterans, and their families — kicked off this year with Military Partner (employee) Appreciation Week, recognizing more than 2,000 reservists and veterans employed at the company. H-E-B also partnered with non-profits that provide life-changing services and support to the military community.

During the past year, the Nash Finch Company and its foundation have provided support to our military in many ways, including: Providing a $30,000 grant for scholarships via the Fisher House Foundation, and another $30,000 to the Vetshouse; supporting Wounded Warrior Project; working with the industry to support HeroBox, collecting and distributing boxes to combat troops; and raising $12,000 at the Dan Daniel Charity Golf Tournament.

Safeway was awarded the Secretary of Defense Employer Support Freedom Award, the nation’s highest honor for exceptional support of National Guard and Reserve. More than 10 years ago, Safeway committed to covering the pay differential and extend full benefits to employees in the Reserve and National Guard called to active duty.

Flagship Food Group donated a portion of sales of its new 505 Southwestern “All American Salsa” to the Wounded Warrior Project. In total, Flagship has committed a minimum of $100,000 to this charity. This year, Flagship Logistics Group opened a state-of-the-art customer contact center in Indianapolis, built to exceed ADA handicap standards for wounded veterans.

The Southeast Association of Frozen & Refrigerated Food Councils donated $25,000 to the Food Industry Serving Heroes Foundation (FISH), a charity that provides veterans with wheelchairs and service dogs, and supports financial literacy and jobs for veterans within the food industry.