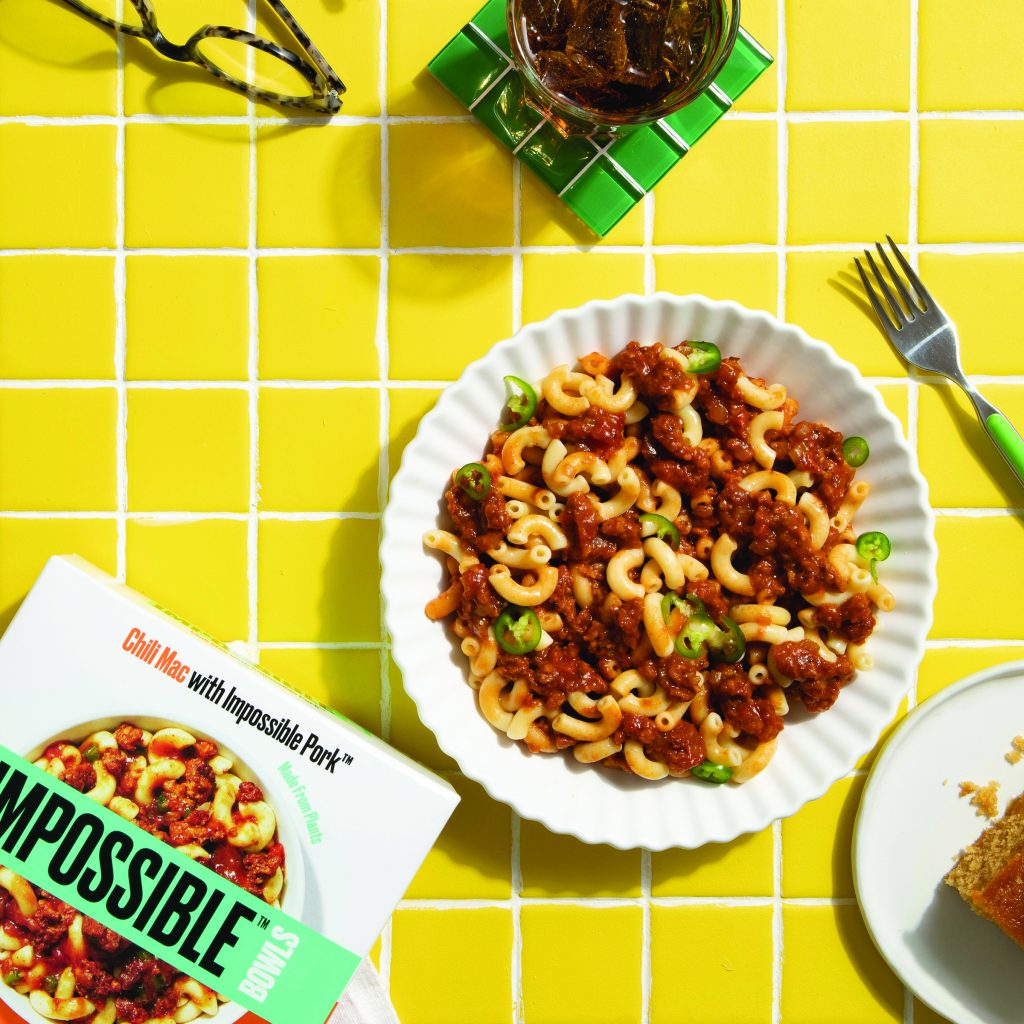 Although dollar sales of frozen dinners and entrees jumped 8.0% during the 12 weeks ended Aug. 7 to $2.81 billion across channels, units tumbled 10.6%, nearly twice the rate as the frozen department as a whole, according to Chicago-based market research firm IRI (iriworldwide.com). Suppliers say higher labor costs for frozen meals — especially single-serves — led to higher-than-average price increases, which may have taken some consumers out of the category. But manufacturers are working overtime to lure them back, rolling out increasingly higher-quality single-serve entrees in particular, many of which are aimed at the growing number of flexitarians seeking plant-based options.

In fact, one of the biggest names in plant-based protein, Redwood City, Calif.-based Impossible Foods just entered the frozen meals category with its own line of eight plant-based bowls. Although the company’s meat substitutes are featured in several other brands’ frozen foods, this collection is offered under the Impossible label, marking the brand’s first real foray outside the meat alternatives category.

“The perception that plant-based meat doesn’t taste good is still pretty pervasive, so the barrier to trial can be high,” says an Impossible spokesperson. However, the company believes that if its meat substitutes are delivered in a convenient frozen meal that only takes a few minutes to prepare, consumers just might give plant-based meat a try. And if it tastes great, too, they may be open to creating their own meals using plant-based proteins. But Impossible Foods isn’t the only company entering the plant-based frozen meal space. Minneapolis-based Wicked Kitchen debuted four chef-crafted vegan entrees featuring global flavors in late August — two with Beyond Meat analogs and two with tofu (Naked Burrito with Beyond Meat, Korean Inspired Bowl with Beyond Meat, Peng Panang Tofu Curry and Seriously Sriracha Tofu & Rice). At 14 ounces apiece, they’re among the largest in the space, according to the company.

Another new entry with ethnic appeal comes from Happi Foodi, Secaucus, N.J., which is launching four plant-based bowls at Walmart this month. Made with meatless crumbles, veggies and “internationally inspired sauces,” the vegetarian lineup includes Bulgogi Bowl, Enchilada Bowl, Potato Hash Bowl and Shawarma Bowl, each of which offers 11 to 17 grams of protein.

Other manufacturers entering the plant-based meals segment are forgoing meat analogs in favor of veggie-forward entrees that are both delicious and nutritious. For example, Toronto-based Wholly Veggie just launched The Good Lunch collection: three plant-based meals “that champion the vegetable” and deliver up to 13 grams of protein at lunchtime. Described as “plant-based twists on North American favorites,” the lineup includes Cheezy Cauliflower & Broccoli, Thai Curry and Southwest Chili, all gluten-free, dairy-free and non-GMO.

Another veggie-forward collection to watch for comes from New York-based Strong Roots, which has created six of “the best-tasting plant-based meals ever,” according to senior vp of sales James Magner. The non-GMO, vegan meals are also low in sugar and contain zero grams of trans fat and at least 7 grams of protein. The first two out of the gate, Thai Green Vegetable Curry and Greek Orzo Pasta Bake, will debut at Whole Foods in January. Other available varieties include Creamy Mac, Chipotle Mac, Veggie Masala, and White Bean, Lentil & Tomato Stew.

‘NUTRIENTS TO POWER YOU THROUGH’

While many of the newest plant-based entrees cater are intended for consumers looking strictly for meat-free meals, others are aimed at those who just want healthy meals packed with nutritious vegetables but don’t necessarily need them to be meatless, too. At one such company, Toronto-based PuraVida, “We take great pride in formulating products [with] high quality, functional ingredients that provide all the necessary nutrients to power you through your day,” says president Lauren Watkins. For example, the company’s nutrient-dense LifeBowls are often made with quinoa due to its higher protein content versus other grains, she explains. Offered in compostable bowls, the lineup includes three vegan options (Forbidden Artisan Roasted Veggie, Tahini Buddha and Mediterranean Orzo) and one made with antibiotic-free free-range chicken (Cilantro Chicken Baja), all free of preservatives, artificial colors and flavors. They’re available now at Sprouts.

HEALTHY MEALS FOR KIDS
The newest addition to the PuraVida collection is four KidsLife bowls featuring familiar favorites such as Mac & Cheese and Pasta with Turkey Meatballs “but made with real ingredients you can actually pronounce,” says Watkins. (Other bowl varieties include Chicken Teriyaki and Burrito.) “Many products marketed to children are laden with artificial colors, flavors, preservatives and high amounts of sodium and sugar,” she continues. “However, those foods do not support a healthy diet and can actually work against positive relationships with food, causing kids to only eat certain foods that don’t have enough nutrition.”

Although the number of consumers following plant-based diets — at least part of the time —continues to grow, there are still plenty of keto diet adherents out there. To make their lives a little easier, Happi Foodi is launching four Keto Bowls in on-trend ethnic flavors. Crafted with white meat chicken raised without antibiotics, veggies and “irresistible sauces,” they contain 5 to 8 grams of net carbs and 13 to 14 grams of protein apiece. Varieties include Barcelona Rosemary, Mediterranean, Provence Pesto and Hunan Orange, all available exclusively at Sprouts.

Although new plant-based meals are grabbing many of the headlines, the conventional side of the category is also welcoming some new items, many of which mimic popular menu items. For example, Chicago-based Conagra recently added three restaurant-inspired single-serve bowls under its P.F. Chang’s Home Menu brand and four new single-serve dishes under its Frontera brand. (See our Mexican Foods category review on page 82 for more information on the new Frontera meals.)

But the company’s newest rollout is Marie Callender’s Duos, which include two entrees in a single meal. “Nine out of the top 10 full-service restaurant chains offer some type of duo/combo entrée on their menu, and 69% of restaurant patrons say they find this offering appealing,” says Lindsay Brady, Conagra brand vp/general manager for frozen meals. “So we’ve brought that experience to the frozen aisle.” Available varieties include Chicken Alfredo & Chicken Parmigiana, Meatloaf & Country Fried Chicken and Creamy Pesto Chicken & Four Cheese Ravioli.

What can retailers do to help sell more frozen entrees? A solid mix of old favorites and trendy new items is key (just be sure premium shelf space isn’t reserved only for the old guard). “Category variety is a real strength,” says Brady. “In one aisle, consumers can find better-for-you meals, indulgent meals, plant-based meals, value meals and premium offerings. So retailers should highlight that the frozen entrée aisle offers something for everyone.”

KEY IS KEEPING ASSORTMENT FRESH
But it’s important to keep the assortment fresh. “Introducing new and exciting flavors in a variety of formats…gives consumers a range of products to choose from and demonstrates that the retailer is progressive and willing to bring in products that meet the evolving needs of consumers,” says Watkins.

And when you do introduce new better-for-you, better-for-the-planet items, for heaven’s sake talk about it! Explain to consumers exactly why you brought in this item or that one and the benefits that they offer — to both them and the environment.

Finally, says Watkins, bundling and multiples pricing are great tools for boosting trial because they give consumers a low-cost way to try flavors they might not otherwise.