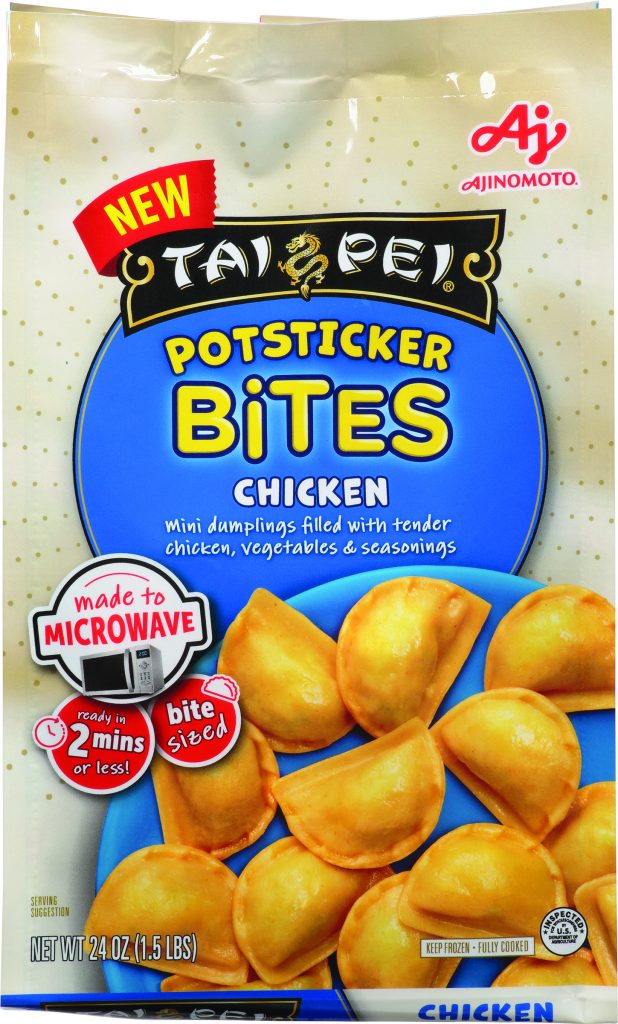 Fried rice-based meals and dumplings drove much of the growth, but look out for new side dishes and desserts.

Sales of frozen Asian foods in the conventional channel jumped 13.6% to $192.02 million during the 12 weeks ended July 10 (versus the same period a year ago), outperforming the frozen department as a whole, reports Chicago-based SPINS. “The growth is coming from Asian branded frozen products (+17%) as opposed to mainstream brands (2%), [So] retailers should take advantage of Asian branded growth when considering new distribution and promotions,” according to Beth Conner, marketing director at Ajinomoto Foods North America Inc., Ontario, Calif.

Offering the right assortment is important because household penetration of frozen Asian foods is only around 50%, suggesting there’s still plenty of room for additional growth, adds Joe Spivak, brand manager for P.F. Chang’s Home Menu, part of Conagra Brands, Chicago. The opportunity is particularly strong in the single-serve meals category. “While Asian food is often served family style, single-serve meals have a growth trajectory that tops total frozen single-serve meals,” he says. “Both consumers and retailers see the appeal of Asian meals as an option for a party of one.”

To meet that need, the company recently unveiled premium single-serve meals inspired by popular P.F. Chang’s Bistro items. “The new collection includes Beef & Broccoli, Chicken Teriyaki and Chicken Fried Rice bowls, as well as a new recipe for our single-serve Chicken Lo Mein,” says Spivak. “Each is made with restaurant-quality ingredients, with no preservatives, no artificial colors and no artificial flavors.”

Restaurant-quality is key because many consumers stopped going to restaurants during the pandemic and hesitate to return now because of high prices, says Jack Acree, executive vp at Saffron Road, Stamford, Conn. So they’re looking for premium frozen meals with clean ingredients and authentic recipes to fill that gap. “Progressive retailers are continuing to up their assortment based on these dynamics,” he adds, citing three new additions to Saffron Road’s frozen Asian foods lineup: Kung Pao Chicken, Korean BBQ-Inspired Chicken Meatballs, and plant-based General Tso’s Asian-Style Dumplings.

While both vegetable- (+18.2%) and meat-based (+14.6%) meals and entrees — especially fried rice varieties — were the biggest frozen Asian food gainers during the most recent 12 weeks, dumplings, potstickers and wontons (+17.2%) also had a good quarter. Samosas (+59.4%) are on the rise, as well, albeit off of a much smaller base.

“Snacking and convenience continue to be important to consumers, with frozen snack and appetizer dollar sales up 12% versus a year ago,” says Ajinomoto’s Conner. “However, the market lacked a potsticker that cooked quickly in the microwave and delivered great taste and texture.” So Ajinomoto developed a new product, Tai Pei Potsticker Bites, that cooks in the microwave in less than two minutes. It’s available in both Chicken and Honey Sesame Chicken flavors.

‘The growth is coming from Asian branded frozen products (+17%) as opposed to mainstream brands (+2%).’

Dallas-based Van’s Kitchen is also delivering a modern flavor in a traditional format with its new Chili Lime Chicken Egg Rolls. “We know that traditional egg rolls will constantly be in demand, but we found that consumers are looking for more diversity in flavor and excitement when it comes to trying new products from a brand they trust,” says chief revenue officer Carl Motter.

Another new snack that fuses cuisines from different parts of the world comes from Chicago-based Suji’s Korean Cuisine. Inspired by Korean street food — with a nod to classic American fair food — its Mozzarella Potato Corn Dog features a Korean style corn dog with diced potatoes on the outside and mozzarella cheese on the inside.

MAKE IT A MEAL

To round out the meal, Suji’s offers a couple of new frozen Asian desserts. Its Dalgona Croffle — a Korean-style waffle made of croissant dough coated with Dalgona (a roasted marshmallow flavor) — is especially popular among young people, says Alex Uoo, COO and senior vp. But a more traditional product, Taiyaki, is also coming to grocers’ freezers. Commonly sold as street food in Japan, Korea and other parts of Asia, “Taiyaki is a Japanese fish-shaped cake commonly filled with vanilla, choco cream, red beans or green tea custard,” he explains. Suji’s Taiyaki will be offered in a variety of flavors.

‘One major retailer reported a 56% lift in category sales when it first tested the Asian destination.’

To help consumers find everything they need to make a complete Asian meal, Schwan’s supports the creation of an Asian destination that brings all frozen Asian food products together in a central two-to-three door section in the frozen food aisle.

“Thousands of grocery stores across the U.S. have been adding the Asian destination merchandising set,” Elliott says. “Not only is it convenient for consumers, but retailers are seeing a lift in sales for the category. In fact, one major retailer reported a 56% lift in category sales when it first tested the Asian destination.”