NOT YOUR GRANDMA’S DOLLAR STORE 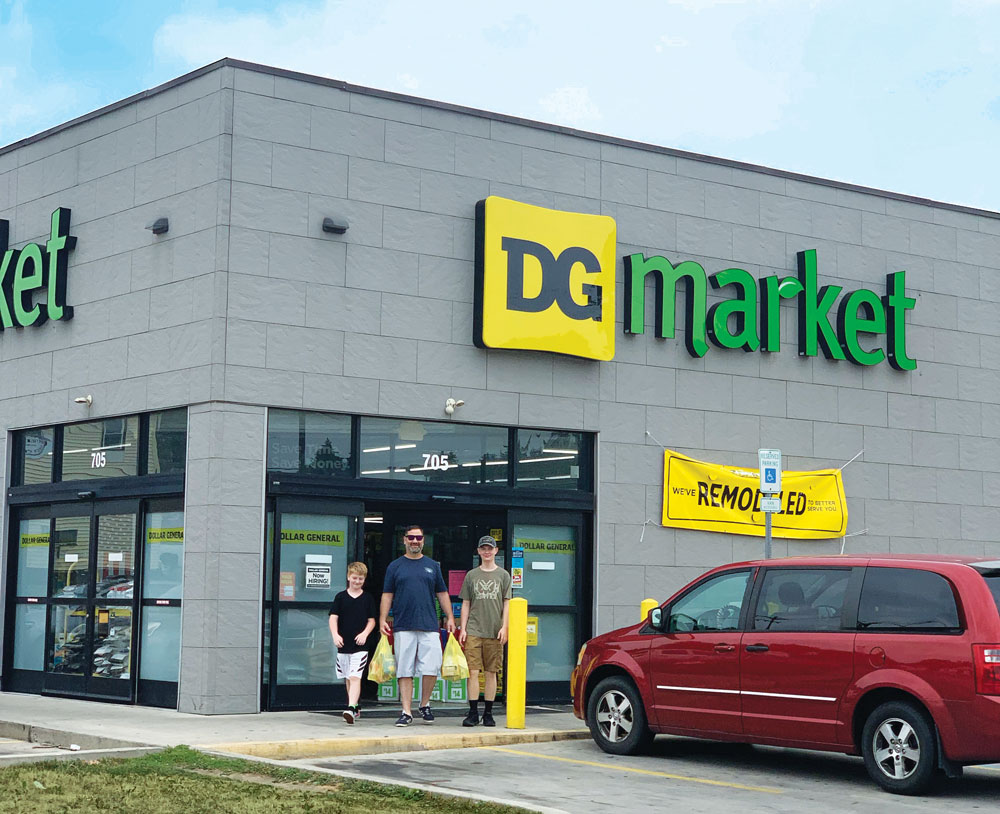 Runaway inflation is driving more consumers to the dollar channel for groceries. But an expanded assortment of frozen and refrigerated products — including some surprisingly upscale offerings — could turn them into customers for life.

Imagine a typical suburban mom popping into the store to pick up her favorite Amy’s Roasted Veggie Pizza for lunch. While she’s there, she grabs some Vermont Creamery goat cheese and Daniele Genoa salami to serve with cocktails that afternoon, a box of plant-based Dream Pops for the kids and a Michael Angelo’s chicken parmesan to cook for dinner the next night. Was she shopping at Wegmans or Kroger — or even Walmart? No, she was buying all of those products at a dollar store.

To be fair, Dollar General’s newest concept, pOpshelf, isn’t a typical dollar store, and there are fewer than 80 scattered across the south (though DG Market + pOp-shelf “combo stores” are also popping up in several states). But the message is clear: dollar stores are no longer limiting themselves to candy, soft drinks and a few sad frozen items in a cooler tucked into the corner. And they aren’t just targeting low-income shoppers.

The grocery strategy isn’t new. Channel leader Dollar General already operates hundreds of DG Markets with expanded perishables offerings, and many of its new and remodeled stores will include space for bigger frozen and refrigerated sets. In fact, it expects to install another 65,000 cooler doors this year. But industry observers say runaway inflation could give dollar stores the opening they need to take the concept from rural areas — where plenty of folks already buy at least some of their groceries at Dollar General or Dollar Tree — to cash-strapped consumers in the rest of the country.

“This inflationary period represents an opportunity for dollar stores to attract new shoppers and position themselves to consumers as a convenient, budget-friendly option for essential items, including food,” confirms Don Stuart, managing partner at Wilton, Conn.-based Cadent Consulting.

Getting them over that psychological hurdle is key because “once people start shopping at dollar stores, they tend to remain shoppers over the longer term,” says Neil Saunders, managing director, retail, at New York-based GlobalData. “One reason for this that’s often missed is because dollar stores are very convenient for top-up shopping and quick trips. So a visit is often not just about price. Dollar General has been particularly good at this by opening thousands of stores in underserved areas.”

While the potential is certainly there, will consumers really trade down from conventional supermarkets to dollar stores for groceries? “Our shopper data shows it’s already happening,” says Simon Johnstone, senior director, grocery, at New York-based Kantar. When faced with rising prices, “Consumers have several options, but we see channel shifting as a big strategy,” he reports. “The past several months, 21% of consumers say they are shopping more at discount stores, including dollar stores.”

A recent study by Addison, Texas-based Symphony RetailAI confirms that many of the most price-sensitive consumers have been unable to make ends meet by switching to cheaper brands or smaller sizes at their regular supermarkets, reports Josh McCann, head of HQ client delivery and analytics. When that happens, “They are forced to look elsewhere to meet their needs.” For at least some of them, that means Dollar General.

Analyst Chuck Grom of New York-based Gordon Haskett wrote in a report last month, “We now believe Dollar General’s core consumer is shopping more frequently at the banner, which, along with improved in-stock levels (following last year’s issues) is leading to a noticeable acceleration in comp trends.” However, he does not believe Dollar General has benefitted yet from middle-income trade down, though he sees it on the horizon for the second half of the year and into 2023 as inflationary pressure proves “sticky.”

But Saunders says middle-income shoppers are already shifting a bigger share of their spend to the dollar channel. Beyond the obvious savings, the appeal is twofold, he explains: “First, the one-dimensional nature of the shop helps people spend less. Second, for many, especially in rural areas, the dollar store is the closest option, so it saves them gas money compared to driving further afield to Walmart or another supermarket.”

Based on its newest formats, Dollar General is well aware that expanding its customer base beyond its core consumer is one of the keys to continued growth. But it’s important to keep that top of mind even as the country teeters on the brink of a recession. “They need to focus not only on low-income shoppers who are really struggling right now but middle- and higher-class consumers,” who may have other reasons for visiting, says Gary Stibel, founder and CEO of New England Consulting Group, Westport, Conn. He describes a phenomenon called “Creeping Walmartism,” a key component of which is the migration of the target market from the economically challenged to the value conscious to all deal fanatics to convenience seekers who can afford to shop anywhere but prefer the fun and convenience of a nearby dollar store. “The bottom line is there’s an opportunity for dollar stores to expand their reach by using frozen and refrigerated as a destination for people doing fill-ins who, once they’re there, may buy even more,” he says.

An expanded frozen and refrigerated assortment could also help dollar stores hang on to new shoppers attracted by the low prices whose situations improve with the economy. During the 2008-2009 recession, explains Johnstone, “Dollar stores did good gaining shoppers but not retaining them once it was over. Back then, they only had two key weapons, convenience and pricing, which were great, but not enough in the absence of a recession. But the business model has changed since then with the addition of frozen and fresh…. It’s a much more robust offer.” So in addition to pricing and convenience, dollar stores have added perishables to their arsenal, says Johnstone. “They’re in a much better place this time around.” But then again, he adds, so are conventional retailers, setting the stage for a battle royal.

‘WHO’S WHO’ OF TOP NATIONAL BRANDS

So what’s the typical DG Market (not the upscale pOp-shelf) offer in the way of frozen foods? Well, there’s plenty of ice cream, pizza, single-serve meals and snacks, and the assortment is a virtual who’s who of top-selling national brands. Think Totino’s, Jimmy Dean, Hot Pockets, DiGiorno, Marie Callender’s, Banquet, Ore-Ida and other heavy hitters. And while Dollar General’s own brand Clover Valley is well-represented in the dairy case, we counted only 18 private label SKUs in the frozen set (ice cream and novelties, fruit, bread and dough, and waffles). Everyone we talked to thought that was a good idea.

“Yes, private brands are a great value, yes, they offer higher percentage margins, and yes they help retailers differentiate themselves,” says Stuart. “But dollar stores are not the place consumers want to experiment with lesser-known or private brands. So they need to maintain a higher percentage of branded products to ensure confidence in the quality of the offering.”

Stibel agrees. “Consumers might buy the private label, but they go into the store for national brands. So it’s important to find the right balance between market leaders like Stouffer’s, value brands like Banquet and then some private label, in that order.”

But that’s not to say there won’t be opportunities to expand the private label proposition later on. “Right now, dollar stores are offering mostly substitutions for the most financially distressed shoppers looking to trade down,” says Johnstone. “But they can look to Aldi and Lidl to see what private label looks like beyond just basic substitutions. There are opportunities there. Health and wellness is where you’re likely to see it first.”

One of the biggest knocks against dollar stores, especially in food deserts where they’re the only game in town, is that they offer few healthy choices. Through its DG Fresh self-distribution initiative Dollar General is working to combat that narrative by adding produce to as many as 3,000 stores by the end of the year and, eventually, more than 10,000 stores. It also offers a selection of Good & Smart private label grocery items, though the line doesn’t extend to perishables. The chain has added a smattering of branded better-for-you products in frozen and refrigerated — Birds Eye frozen veggies, Sunrise Growers frozen fruit, Tyson boneless skinless chicken breasts, Outshine no-sugar-added fruit bars, Light ‘n Fit yogurt, Naked juice, etc. — but the ratio is significantly lower than in a conventional supermarket, highlighting a significant opportunity for improvement.

Should manufacturers of higher-end products think twice about selling their products at a dollar store for fear of diluting their brand message? Stuart doesn’t think so. Between the two of them, he says, Dollar General and Dollar Tree/Family Dollar operate more than 34,000 stores, making them No. 1 and No. 2 in the U.S., respectively, in terms of store count. “Most manufacturers can’t afford to say no to that opportunity.”

“Smart manufacturers get it,” agrees Stibel. “This is virgin territory, an opportunity to get a foothold in a growing channel and become a major factor like P&G did at Walmart back in the day.”

“Dollar stores can tap into that low-income consumer segment like no one else can,” continues Johnstone. “They provide a great medium through which you can deliver your message to the more aspirational shopper.” They may not want organic, he adds, but dollar store consumers are just as interested in healthy, high quality food as everyone else.

CHAINS NEED TO UP THEIR GAME

Beyond finding the right assortment, Stibel says dollar stores that want to compete with supermarkets for consumers’ grocery dollars need to up their game with regard to delivery, loyalty programs, electronic communication, “and all of the other trends that have caught fire since the pandemic. They need to be where consumers want to buy, when consumers want to buy and the way consumers want to buy. But they have fallen behind.”

Another area in need of improvement is perhaps best expressed by a post that went viral on social media recently: “Stop building new stores and start unpacking existing stores.” All retailers are struggling with labor shortages, but dollar stores seem to be hit particularly hard — with the evidence often left lying in the aisles.

“Operationally, average store size, SKU counts and service offerings are increasing, all of which add complexity,” says Johnstone. “But the number of employees is still limited. If they’re not paying them enough, it all breaks down. So if sales are growing, they need to start investing in more staff.”

Self-checkout technology could also help relieve some of the pressure on staff. Self-checkout options are expected to be available in 11,000 Dollar General stores by the end of the year, and the chain began piloting 200 self-checkout-only stores, which, if successful, would free up more time for associates to stock shelves and keep stores tidy.

What can conventional retailers do to fend off the dollar store threat? Offering a value tier — ideally a private label — so customers can trade down is paramount, says Saunders. But messaging is perhaps just as important.

“Don’t try to price match,” says Johnstone. That’s a losing battle. “Retailers really need to think more psychologically about pricing messages. Messaging changes viewpoints.” Think about things like cart comparisons or healthy meals under $5 or price freezes on certain items — anything that will resonate with consumers.

“The other thing is to emphasize convenience,” says Saunders. “Larger supermarkets can’t open anywhere near the number of stores as the dollar chains, so they will never be as local. But they can offer convenient services such as e-commerce and delivery that save time and gas.”