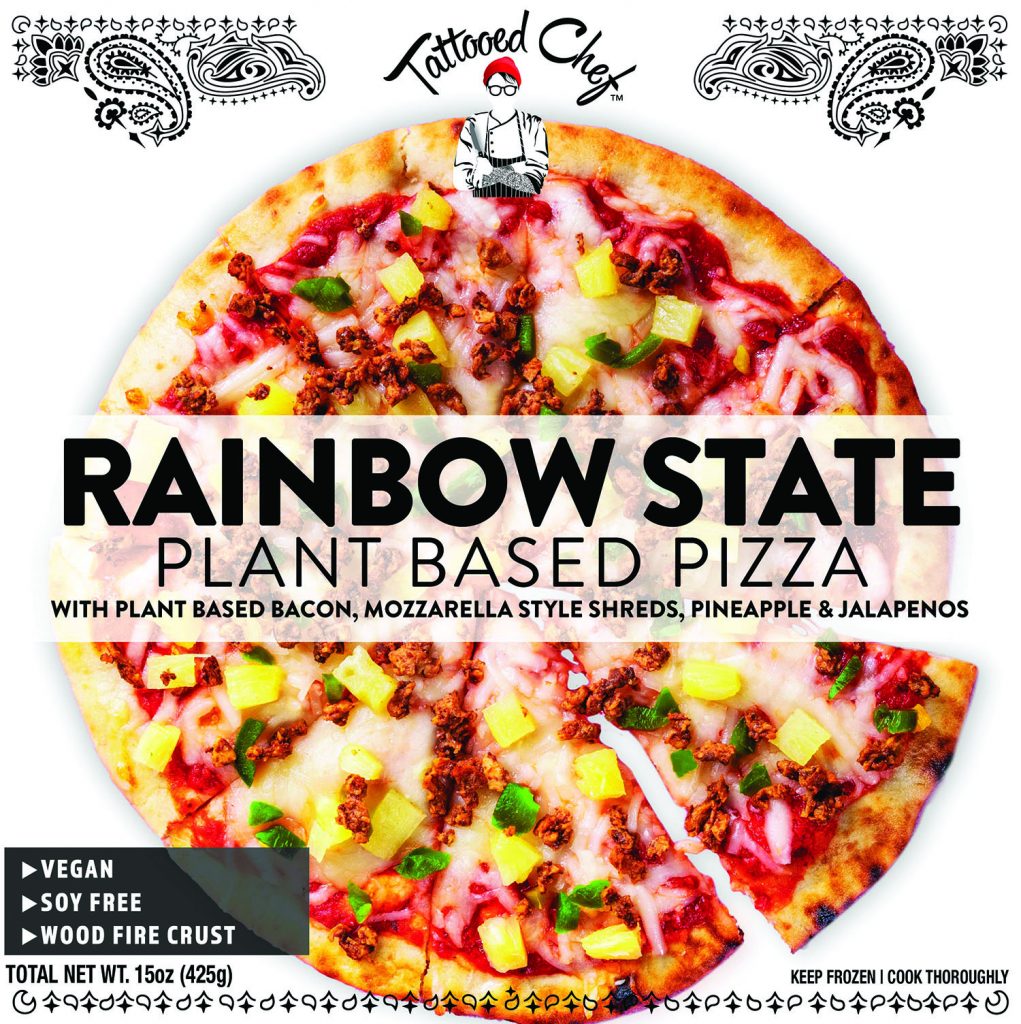 New indulgent and better-for-you options make it easy for cash-strapped consumers to choose frozen over takeout.

Thanks largely to rampant inflation, frozen pizza sales jumped 7.9% during the 12 weeks ended April 17 to $1.50 billion, reports Chicago-based market research firm IRI (iriworldwide.com). However, unit sales fell 2.9%. The fact that the loss wasn’t worse (the frozen department as a whole saw units tumble 4.7%) may signal that consumers are using frozen pizza as a less expensive alternative to takeout and dine in. Manufacturers say a 5.5% increase in unit sales of private label — the only top five “brand” that saw units rise — could also be the result of consumer belt-tightening.

“A years-long trend toward premiumization shows no signs of slowing, with most new entries falling into either the super-indulgent or better-for-you categories”

Still, a years-long trend toward premiumization in the segment shows no signs of slowing, with most new entries falling into either the super-indulgent or better-for-you categories. In fact, two new premium product lines, Stuffed Crust and Fully Loaded, are responsible for 20% of the Red Baron brand’s 13.9% growth during the past 12 weeks, reports Roger Galloway, senior director of brand marketing for Schwan’s Consumer Brands, Marshall, Minn.

And on the healthy side, “Premium better-for-you pizzas deliver the indulgence, convenience and health benefits consumers want while providing a great value compared to local restaurant or takeout alternatives,” says John Reaves, CEO of Carlsbad, Calif.-based Milton’s Craft Bakers. The message is clear: Even if they have to eat at home, consumers want premium quality.

DOUBLING DOWN ON DECADENCE

“Stuffed crust is the No. 1 most requested pizza style by our consumers,” adds Holowiak. “When it comes to pizza, more cheese, sauce and toppings are always welcome.”

“Screamin’ Sicilian is our top-performing branded pizza, and it’s important to us to keep bringing new flavors and innovation to our core consumers in order to keep them excited about the brand and to incent repeat purchases,” says chief product and innovation officer Nick Falluca.

Schwan’s is expanding its premium Freschetta brand as well, adding a new Margherita variety to its Thin Crust lineup,

To make it easier for shoppers to find gluten-free frozen pizza regardless of where they live, Schwan’s recently expanded a direct-to-consumer e-commerce pilot program on its Freschetta website. Consumers in 15 Midwest states can order one- and two-packs of their favorite gluten-free varieties, including the new Margherita flavor, which will ship directly to their homes, typically within two days, says Galloway.

Milton’s Craft Bakers is also expanding its gluten-free pizza lineup with a new Grilled Chicken & Garlic variety. Built on a cauliflower crust, the new addition features real chicken and a unique, savory sauce with a hint of heat, highlighting growing demand for bold flavors. “Many better-for-you frozen pizza brands require a trade-off between taste, health and real ingredients,” says Reaves. “But free-from pizza like ours with real ingredients that deliver superior taste and texture will continue to drive growth and improve category performance.”

Another player in the gluten-free space, Los Angeles-based Caulipower, is expected to add White Pizza with Spinach to its cauliflower crust line this summer.

The plant-based side of the better-for-you segment also continues to welcome an array of new products featuring both traditional and not-so-traditional toppings. While flavor trends come and go, “We think recreating classic pizza flavors in a healthier way is the best approach,” say president Joe Turturici and director of operations Stefano Cataldo, co-founders of Montreal-based Oggi Foods. To that end, they report, the company is rolling out plant-based, gluten-free versions of two consumer favorites: Pepperoni and Supreme. “They’re a modern, vegetarian take on two classics that everybody loves,” say the pair.

Paramount, Calif.-based Tattooed Chef takes a similar approach to the plant-based category with its new 100% vegan Wood Fired Pizzas, which are intended to evoke a nostalgic feeling (think pizza party in the backyard). However, its collection features more innovative flavors that “allow consumers to experience different cuisines,” says chief growth officer Matt Williams. In response to growing demand for pizza topped with plant-based proteins, the line also incorporates “even more exciting” meat alternatives, including plant-based Mediterranean sausage and plant-based Soppressata, both of which consumers will only find on pizza from Tattooed Chef.

Minneapolis-based Wicked Kitchen U.S. is also rolling out a wood-fired plant-based frozen pizza collection this summer. Built on a hand-stretched sourdough crust shaped like an oval, the gourmet pies are topped with a meltable plant-based “motz” that the company claims is “better than any other on the market.” The lineup includes The Wicked Meaty Pizza (topped with spicy plant-based sausage, PepperNOni, mushrooms and jalapenos), The Saucy Motz Pizza (basil, kale and cherry tomatoes) and Rulebreakin’ Rustic Veg (olives, peppers and sautéed mushrooms).

PIZZA ANY TIME OF DAY

While frozen pizza is a dinnertime favorite, new products make it easier to enjoy during other dayparts as well. For example, in an effort to meet consumer demand for more variety at lunchtime, DiGiorno just added two new hand-tossed crust style flavors — BBQ Recipe Chicken and Chicken Alfredo — to its Personal Size collection. And for those seeking an alternative to cold pizza for breakfast, the company recently expanded its Croissant Crust lineup to include three breakfast varieties: Eggs Benedict Inspired, Sausage & Gravy and Cinnamon Roll.

Made with cage-free eggs, 100% real cheese, premium pork sausage and other high quality ingredients, they’re the only croissant-style breakfast pizzas available nationally in the frozen aisle, says Holowiak. But they’re not just for breakfast, she adds, citing a Mintel study that found 40% of consumers seek breakfast foods outside the morning daypart. “Interest in variety and dynamic flavors remains high,” she says. “And unique food mashups always intrigue and delight.”

Consumers are also increasingly interested in new brands and pizza styles from other parts of the country. To accommodate customers who needed a pizza fix outside of business hours, Dedham, Mass.-based Papa Gino’s began selling a frozen version of its fresh handmade pizza at select New England supermarkets in early 2018. But for the first time in its 61-year history, the company is now offering its pies outside New England, including at Walmart stores in 20 states.

Prior to the expansion, the company upgraded the taste and texture of its crust to more closely resemble its hand-tossed restaurant crust. Available varieties include Pepperoni, Cheese, Extra Cheese, Italian Sausage and Pepper & Onion, all made with the same signature three-cheese blend and vine-ripened tomato sauce used in Papa Gino restaurants.

“We have gotten great feedback from New England transplants happy to see us again as well as shoppers new to our brand who are thrilled with how the pizza tastes,” reports chief experience officer Deena McKinley, who says putting the company’s story on packaging helps familiarize new customers with Papa Gino’s history.

Industry observers agree that new products are key to continued growth in the frozen pizza segment. But how do retailers balance demand for trendy, new varieties against the need to provide ample space for top performers? It’s not easy, says Williams, but he suggests they start by eliminating widespread duplication in the conventional segment in order to make room for more better-for-you items in particular. “Retailers need to create more of a destination for healthy eating,” he remarks.

By doing so, “They can capture shoppers who are currently going to other channels for better-tasting, more nutritious options,” adds Reaves.

But Galloway advocates a more cautious approach, suggesting the use of continuous analytics to maximize both sales and in-stock positions. “With demand for frozen pizza at a record high, it’s been a challenge for retailers to ensure top-performing items are available on shelf. So we continue to have conversations with them about the importance of balancing assortment variety with capacity for top items.”