BETTER-FOR-YOU TAKES A BITE OUT OF SNACKS 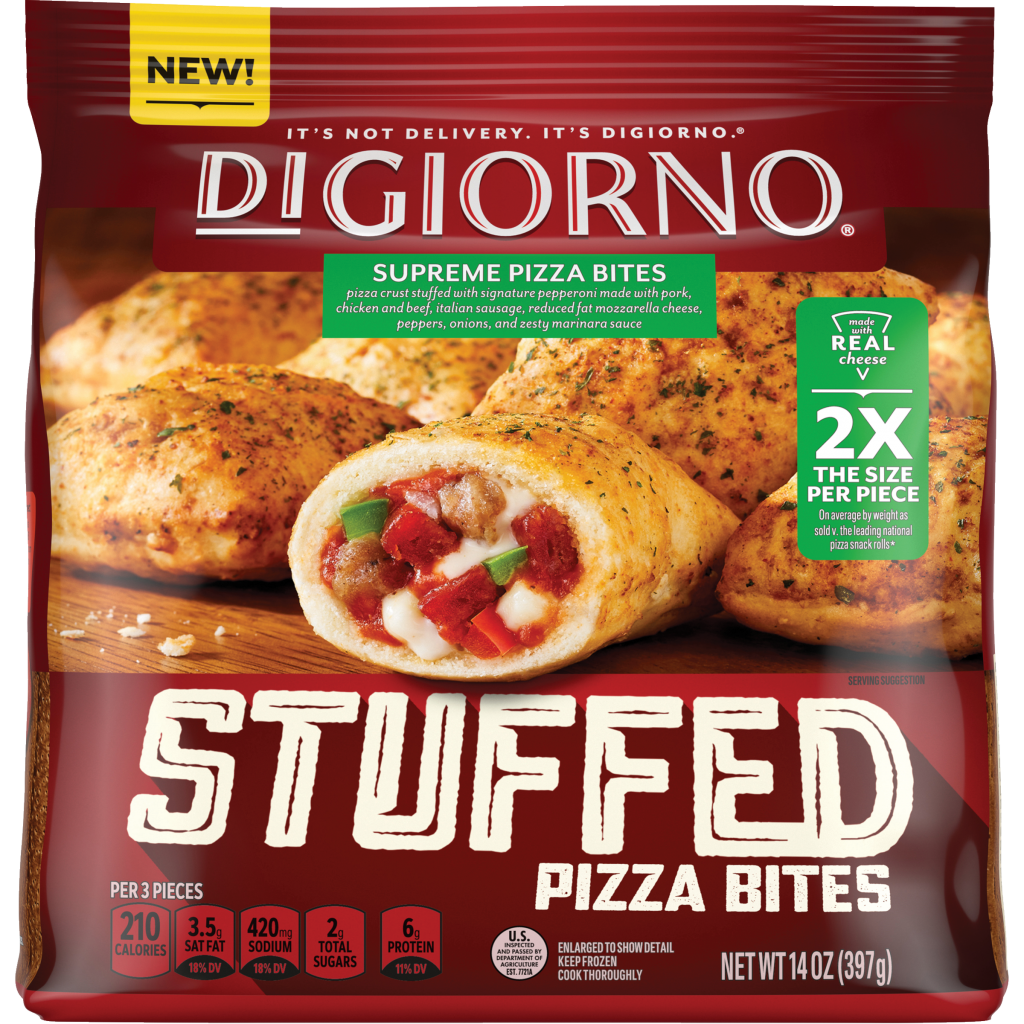 Although inflation is hitting hard, consumers are willing to pay a premium for cleaner, healthier options. But proper merchandising is crucial.

Although units and volume were down, dollar sales of handheld entrées and appetizers/snack rolls were up 12.4% and7.4%, respectively, outpacing growth for the frozen department as a whole (+5.4%) in the 12 weeks ended March 20, according to Chicago-based market research firm IRI. Among the biggest gainers — all of which also saw unit sales expand — were Smucker’s, Ajinomoto-owned José Olé and Tai Pei, Amy’s, Pagoda and J&J’s SuperPretzel. But some of the best numbers in both categories were posted by private label. While the quality of store brand snacks is on the rise —as are assortments — at least some of that growth is probably due to retail price increases. But even for consumers who choose national brands, a heat-and-eat frozen item is still cheaper than restaurant fare.

‘Consumers are tired of the same foods they’ve been eating for two years. Variety is back in play.’

“Inflation is driving more people to the grocery store,” explains Kierstin De West, chief marketing officer at Glendale, Calif.-based Alpha Foods, whose new consumer study with The Harris Poll reveals that 70% of Americans are eating out less due to inflation. But they’re still pressed for time, leading many to choose convenient frozen options.

That trend combined with a continued shift from three well-defined meals each day to mini meals and snacks whenever the urge hits suggests the coming months will be good ones for the frozen snacks, apps and handhelds category. But not all products will enjoy the same growth, as a growing number of consumers are seeking healthier alternatives to traditional snacks. Although top seller Totino’s saw its dollar and unit sales tumble 6.7% and 23.1%, respectively, during the most recent 12 weeks, pizza rolls are still considered the granddaddy of frozen snacks. In fact, frozen pizza category leader DiGiorno just entered the category with its own line of Stuffed Pizza Bites (Pepperoni, Supreme, Three Meat and Four Cheese) that will test the reach of its brand. But many consumers want cleaner options. Portland, Ore.-based Brazi Bites introduced such a product last spring within its empanadas collection. But after only six months on the market, Pepperoni Pizza’nadas were its No. 2 SKU. “That sent a clear signal that consumers are hungry for a clean label, better-for-you pizza snack,” says co-founder and CMO Junea Rocha. “So we focused on bringing additional pizza flavors to market and launched Pizza Bites as a separate line at Expo West.”

Made with the company’s award-winning cheese bread dough and no preservatives, the gluten-, grain- and soy-free bites come in three protein-packed flavors: Pepperoni, Four Cheese and Supreme. During the most recent 12 weeks, says Rocha, unit velocity rose 3.2% — despite a retail price increase. Clearly, she adds, “Health-conscious consumers are willing to pay more for functional, clean ingredient options.”

Another new player in the better-for-you pizza bites space, Austin, Texas-based Snow Days, offers another version of the iconic snack. Also gluten- and grain-free, its 100% organic product is made with olive rather than canola oil, a sauce with hidden veggies and no added sugar, says founder and CEO Jason Karp. “It’s a great choice for adults who want to eat pizza bites again.” The company just added a fourth flavor, Buffalo Chicken, and last month, it began shipping a first-ever limited-edition Taco variety.

Another new veggie-forward bite comes from Veggies Made Great, Rahway, N.J., whose new Stuffed Cauliflower Bites debuted at Giant last month. With a blend of veggies in the crust and veggies in the filling (which also includes real cheese), the gluten- and peanut-free bites are close to 60% vegetables. Plus, they contain 6 to 10 grams of protein and no more than 200 calories per serving. Available flavors include Margherita, Roasted Veggie & 4 Cheese Blend, Spinach & Ricotta, and Caramelized Onion & Mushroom with Swiss Cheese.

“Veggies Made Great didn’t play in snacks before, but it’s an occasion where vegetables were largely absent, so we saw an opportunity to innovate in that space,” says senior brand manager Christine Luongo.

Category newcomer Bertoncello offers a more European twist on the veggie-based bite. Known for its gnocchi, the Vicenza, Italy-based company created a line of pre-cooked frozen Stuffed Gnocchi Bites for the U.S. market that feature a variety of bold fillings wrapped in vegetable gnocchi.

“We use high quality, locally sourced, Italian vegetable purees in our dumpling dough — never dry vegetable powders. And we pre-steam them to perfection, locking in all the delicious flavors and maintaining the pillowy texture of traditional gnocchi,” says U.S. sales director Elizabeth Garrity. Quick and easy to prepare in an air fryer, conventional oven or toaster oven, “The product taps into the ‘poppable’ bite-size snack trend and can be paired with a variety of dips and sauces,” she adds.

While inflation is driving more consumers to the supermarket for more economical make-at-home foods, it’s also igniting “plant-based curiosity,” says De West. In a recent survey, she reports, 55% of respondents said rising meat prices are causing them to consider plant-based options while 51% said the same thing about rising dairy prices. The good news is there are more vegan and vegetarian choices now than ever before.

For example, Brooklyn-based Savorly just added plant-based Puff Pastry Dogs to its lineup. A more modern version of pigs in a blanket, the non-GMO sausage bites contain no artificial flavors, colors or preservatives. And because they’re vegan, they’re accessible to even more consumers than the company’s vegetarian appetizers, says brand manager Hannah Jablonski. Most importantly, though, “They taste like the real thing.”

Savorly is also building on the success of its handheld Breakfast Turnovers with a new vegetarian-friendly Cheese Turnover for anytime of day.

Alpha Foods is also expanding its handhelds lineup with its new Globally Inspired Wraps delivering in-demand ethnic flavors that allow consumers stuck at home for two years to “travel with their taste buds,” says De West. The company knew that mainstream Chinese, Italian and Mexican varieties wouldn’t cut it, she continues. “People are craving more adventurous flavors, which is what makes these different from other plant-based wraps on the market.”

Early in the pandemic, consumers gravitated back to more conventional frozen snacks, which recaptured a lot of shelf space from better-for-you brands, according to Rocha. But those days are over. “Consumers are tired of the same foods they’ve been eating for two years,” she says. “Variety is back in play.” While shelves are being reset, however, “Retailers can make it easier for shoppers to find better-for-you snacks by placing them next to their conventional counterparts,” says Rocha. “Placement is one of the most critical drivers of better-for-you brand success.”

‘Retailers can make it easier for shoppers to find better-for-you snacks by placing them next to their conventional counterparts.’

Jablonski couldn’t agree more. “Merchandising conventional and better-for-you products together causes consumers to pause and take note of other choices and allows them to easily compare ingredients and nutritional facts without running back and forth between doors or aisles.” She adds, “Many consumers consider themselves flexitarians and would try a plant-based alternative to their favorite snack if it was right in front of them.”

Jablonski is also a big proponent of curated endcaps to drive incremental sales. “We get tremendous lift from these off-shelf opportunities,” which can empower shoppers to entertain more at home. “Even something as simple as Savorly cocktail bites, a Trendy new wine and a deck of cards can inspire an impromptu get-together.”