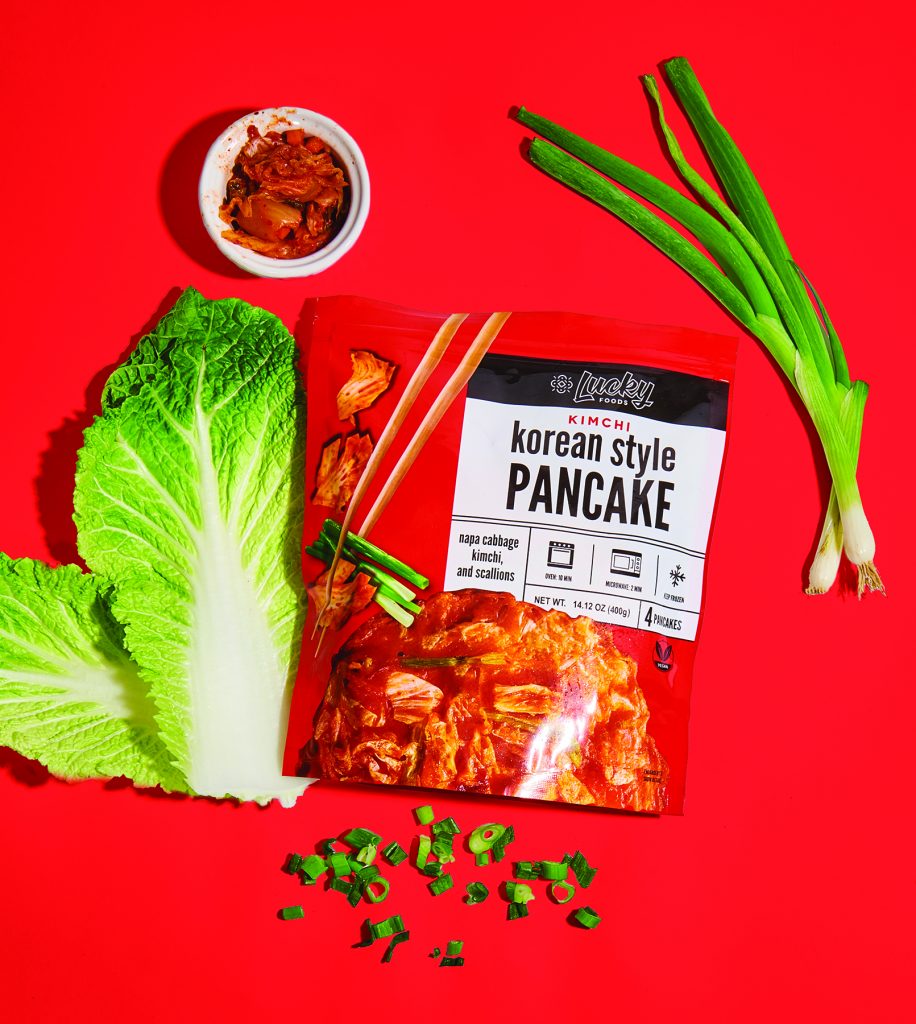 Side dishes, appetizers, and an expanded variety of sizes in entrees are driving growth. But watch for new plant-based options in multiple categories.

million, according to the Chicago-based SPINS. Not only is the segment outpacing growth for the frozen food department as a whole, it’s also outperforming global cuisines such as Mexican and Italian.

‘Retailers have a great opportunity to highlight the breadth of their assortment — not just entrees, but appetizers and sides as well. Everything consumers need for a great meal is available in their freezer case.’

Industry observers say the gains are partly the result of a broader offer. While the category has traditionally focused on entrees, manufacturers are placing more attention on expanded offerings for appetizers and sides, explains Joe Spivak, brand manager for P.F. Chang’s Home Menu, owned by Chicago-based Conagra. The category is also welcoming a wider variety of sizes — from single-serve meals to family-size portions — as well as more flavors, including those with a little more spice.

“You can create a full Asian meal from the frozen section now, so retailers have a great opportunity to highlight the breadth of their assortment — not just entrees, but appetizers and sides as well,” says Spivak. “Everything consumers need for a great meal is available in their freezer case.”

Ease of preparation is also resonating with consumers, explains Haojun Li, manager for GWI Foods, New London, Conn. “The way to cook frozen Asian food is more manageable and straightforward than other types of frozen foods, and the higher fault tolerance in cooking has made frozen Asian foods more convenient,” says Li. “People do not have to follow the exact cooking instructions and cooking times to have the same tasty dish as a restaurant.”

Dollar sales of frozen Asian appetizers and snacks in the conventional channel were up 28.5% to $77.83 million during the 12 weeks ended Dec. 26. And although SPINS doesn’t break out side dishes specifically, manufacturers say sales are booming. Much of the credit goes to a plethora of new items introduced within the past year or so. For example, the Bibigo brand from Bloomington, Minn.-based Schwan’s, an affiliate of CJCJ Foods Americas, now includes three varieties of Korean-style fried rice (Vegetables with Kimchi, Chicken with Korean Barbeque and Shrimp with Soy Garlic). P.F. Chang’s Home Menu added Kung Pao Cauliflower and Crispy Green Beans to its appetizer lineup. And InnovAsian Cuisine, Tukwila, Wash., counts Vegetable Lo Mein, Spicy Noodles and Chinese-Style Barbeque Pork Fried Rice among its newest side dishes.

But one of the newest frozen Asian side offerings on the market is a Chili Lime Chicken Egg Roll from Dallas-based Van’s Kitchen that was launched at the end of 2021. “This new product is a fusion item that incorporates bold and spicy notes, which is an homage to Hispanic flavors. The chili spices and the lime give it a more natural, zesty flavor,” says Carl Motter, chief revenue officer for Van’s Kitchen.

Similar to other categories, the frozen Asian foods segment is also welcoming more plant-based options for vegans and vegetarians as well as a growing number of flexitarians. While many Asian dishes are naturally meat-free, manufacturers are also rolling out plant-based versions of classic meat-based dishes.

As part of a June launch that also includes Kung Pao Chicken and Chicken Lo Mein, Stamford, Conn.-based Saffron Road will debut plant-based General Tso’s with dumplings made from cauliflower. “As a part of our clean-label commitment, our plant-based General Tso’s does not use a high-processed chicken analog, but rather a traditional blend of cauliflower and chickpea flour,” explains executive vp Jack Acree. “Saffron Road’s shoppers want real plant-based food that was grown in soil, not something manufactured in a lab.” (Korean Barbeque Chicken is also coming in 2022.)

Meanwhile, Sukhi’s Gourmet Indian Food recently introduced a Cauliflower Curry and Lentils entrée with turmeric rice and naan. “With cauliflower being a really popular vegetable in Indian cuisine, it just made a lot of sense to bring this veggie into the limelight with our new frozen entrée,” says Nalavade. “The use of turmeric in our rice also leverages the trend of turmeric as a functional food with health benefits.”

Seattle-based Suji’s Cuisine is also jumping on the plant-based trend. But according to COO Alex Uno, even plant-based Asian foods need to be authentic and not westernized — and that includes the packaging. To this end, Suji’s offers a line of plant-based meat bowls featuring traditional ingredients, including Spicy Beefless Bulgogi, Chicken and Garlic Teriyaki, Beef and Broccoli, and Orange Chicken.

GROWTH IN DUMPLINGS & BEYOND

Brad Smith, vp of marketing at Schwan’s Consumer Brands, says the frozen retail dumpling category has more than doubled during the last two years. So in 2022, the company is focusing on expanding growth of its Bibigo dumpling portfolio, including introducing smaller package sizes for the most popular varieties to make them more accessible for single-serve occasions.

Other players in the dumpling space are moving into plant-based. GWI Foods’ new line leaves out unnecessary ingredients and keeps the products healthy while still providing good taste, says Li. But to help make the dumplings stand out, he adds, the company has developed uniquely colored wrappers. Available varieties include Fortune, Happiness, Shuijiao and Pan-Fried.

‘Americans are craving more authentic ethnic foods while being increasingly aware of sustainable and clean ingredients.’

Similarly, Washington, D.C.-based Nomad Dumplings is reportedly adding a fourth variety to its line of regionally inspired (and also rainbow-colored), plant-based dumplings. Created in conjunction with Omni Foods, the new plant-based pork variety is made with Chinese broccoli and kale. The company also transitioned its Shangri-La Honey variety, made with No Evil Foods’ plant-based chicken, to fully vegan.

Other Asian food manufacturers are branching out from dumplings into new items. For example, Beaverton, Ore.-based Lucky Foods recently introduced savory Korean Pancakes in both Kimchi and Veggie f

lavors, allowing it to expand into another daypart. “We launched these as part of our mission to bring clean, yet authentic Asian foods to American households,” says brand manager Megan Benson-Rolerkite. “Americans are craving more authentic ethnic foods while being increasingly aware of sustainable and clean ingredients.” All Lucky Foods products are free of MSG, GMOs, added colors and preservatives, she notes.

Meanwhile, Uno says his company is seeing frozen Asian desserts resonate with a younger generation wanting to try something new. To that end, Suji’s has found success with its taiyaki products, available in flavors such as Vanilla Custard Cream and Creamy Chocolate. Sales of Asian frozen desserts jumped 13.2% during the 12 weeks ended Dec. 26, according to SPINS.

“We have noticed a greater demand for more traditional flavors when it pertains to frozen Asian foods — not the same orange chicken or simple fried rice that is found at nearly all locations,” says Smith. “With the pandemic, travel was halted for many, so their exploration was through food,” he explains, citing a need for retailers to keep up. “Endcaps can continue to serve as a great way to display those new items and draw people in,” he adds.

Smith is also a big advocate of Schwan’s “Asian Destination,” a merchandising model that brings together all frozen Asian foods, regardless of type or brand, in one central location. Typically two to three doors, it includes appetizers, sides, and single-serve and multi-serve entrees.

‘With the pandemic, travel was halted for many, so their exploration was through food.’

“It’s essentially a one-stop shop, where consumers can build a full meal,” Smith explains. “Of course, it has mainstream products like orange chicken, but it’s also a place where they can discover new foods as well.”

Online sales are also an important driver of the market. Angela Rosenquist, vp of sales for InnovAsian, believes the shift from in-store shopping to online purchasing through pick-up and delivery is a trend that is here to stay, and the company has invested heavily during the last two years in this space. “At some retailers,” she reports, “online sales of some of InnovAsian’s top sellers now represent as much as 15% of total item sales.”