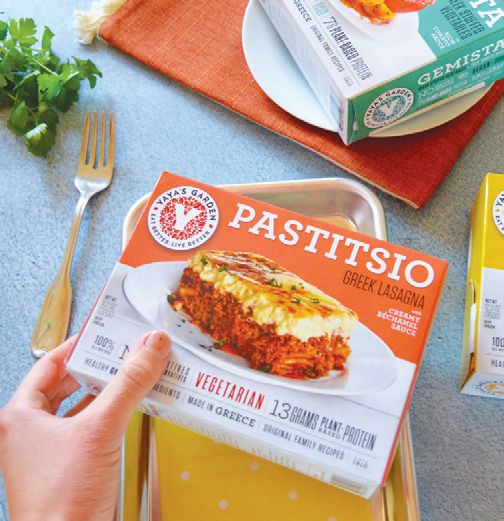 While the rest of the frozen department is struggling to ﬁnd growth versus last year, frozen meals are up 6.3% during the most recent 12 weeks.

Unlike many other frozen food categories that are coming back to Earth after lapping last year’s pandemic-driven surge, the dinners and entrees segment continues to register strong growth. Compared with the same period a year ago, sales during the 12 weeks ended Aug. 8 were up 6.3% to more than $2.47 billion across channels, according to Chicago-based market research firm IRI (iriworldwide.com). Gains were strongest in the single-serve subcategory (+8.1% to $1.22 billion), followed by multi-serves (+5.3% to $507.17 million) and handhelds (+4.2% to $749.56 million).

The category’s strong performance versus the frozen department as whole, whose sales slipped 0.2% during the most recent 12 weeks, is probably due at least partly to the fact that dinners and entrees — particularly single-serves — didn’t see the same level of growth last year as many other frozen foods, so gains versus 2020 weren’t quite as hard to come by. (Remember, the first several months of the pandemic not only saw consumers cooking more from scratch and eating with the family but also working from home, eliminating the need to grab a microwaveable meal for lunch at the office).

Now, however, consumers are trickling back to in-person jobs as kids return to school. And that whole scratch cooking thing? It got old fast, says Kelly Torres-Chad, marketing director at Corona, Calif.-based Cadence Kitchen (cadencekitchen.com). But the category owes its success to more than just ease of preparation, she says. Bare shelves at the beginning of the pandemic led shoppers to parts of the store they hadn’t visited before as well as to unfamiliar products and brands. “Many consumers were pleasantly surprised to find new frozen entrée offerings they had never tried before,” including high quality, clean label items they didn’t know existed, she explains. As a result, “Consumers are beginning to see frozen food as a luxury rather than purely a convenience, offering not just a night off from cooking but an opportunity to indulge.”

“People found some very viable options that they weren’t aware of before,” confirms executive vp of product development for Denver-based MSK Foods Glenn Backus, who sees a long runway for better quality premium meals such as those offered under the company’s new Martha Stewart Kitchen (marthastewartkitchen.com) label. Other manufacturers share his optimism.

“Frozen entrees have sustained strong growth since they were ‘rediscovered’ during the pandemic, and we expect them to maintain that relevancy well into the future,” says Karen Jobb, chief customer and consumer officer at Petaluma, Calif.-based Amy’s Kitchen (amys.com). “Frozen entrees align with what consumers want now: convenience, flavor, clean labels and good nutrition.”

While convenience and flavor are a given, frozen meal makers are working hard to clean up ingredient panels and deliver the better-for-you attributes sought by today’s shoppers. What exactly do they want? “Consumers are seeking more nutritious frozen meals that are less processed and made with simpler ingredients,” answers James Hedges, senior manager of category solutions at Stamford, Conn.-based Daymon Worldwide. In addition, he says, citing the popularity of specialty diets such as keto, Whole30, gluten-free and vegan, “Shoppers are looking for…dinners and entrees that meet their lifestyle needs in the most nutritious way possible.” (Oh, and they want to see proof, making third-party certifications and transparency around both ingredients and packaging more important than ever).

“Consumers are trying to go ‘back to nature’ by eating whole foods,” continues Torres-Chad, who sees better-for-you as a key driver of category growth. “They see food as medicine so they desire functional solutions and ingredients that promote health and self-care and they want to avoid those that have been linked to detrimental health effects.”

But topping everyone’s list of better-for-you attributes most in demand is plant-based. However, if growth is to continue at the current rate, “It will be important to satisfy not only vegans and vegetarians but flexitarians,” says Torres-Chad, who believes bold, ethnic-inspired flavors are key to broadening plant-based appeal. To that end, Cadence Kitchen recently added a Vegan Latin Bowl to its line of flash frozen meals that don’t require artificial preservatives or any of the additives typically needed to counteract the effects of freezing. The new item has been so well received, says Torres-Chad, that the company is already developing a second plant-based offering.

Another company jumping into the plant-based global meal space is U.K.-based Wicked Kitchen (wickedkitchen.com), which makes its U.S. headquarters in Minneapolis. Coming soon to Kroger stores, the company’s plant-based frozen meals debuted at Sprouts Farmers Markets in August. “We know consumers are seeking more creative, comforting, bold-flavored and globally inspired plant-based meals that don’t compromise flavor for convenience,” says CEO Pete Speranza of the decision to bring the Wicked Kitchen lineup to the states. First varieties out of the gate include Naked Burrito with Beyond Meat, Korean Inspired Bowl with Beyond Meat, Peng Panang Tofu Curry and Seriously Sriracha Tofu & Rice, all chef-crafted “with knife-sharp attention to detail.” However, Speranza expects the assortment will change as the company learns more about what performs best among U.S. shoppers. He adds that the initial launch includes both ready meals and meal kits, so there’s something for consumers who want a quick option for busy weeknights as well as those who enjoy spending a bit more time on meal prep.

But not all new ethnic offerings are plant-based. And Mediterranean isn’t the only global cuisine in demand. For example, says Swati Elavia, president of Shrewsbury, Mass.-based Monsoon Kitchens (monsoonkitchens.com), Asian frozen meals are growing more than 2.5 times faster than the category as a whole, evidenced by the success of the company’s new Indian-inspired Basmati Rice Bowls. While its vegan Black Eyed Pea Masala Bowl has proven a popular alternative to all of the chickpea-based offerings out there, Elavia says a pair of shrimp-based bowls — Shrimp Tikka Masala and Coconut Shrimp Curry — are also resonating with health-minded consumers. “The pescatarian segment is trending upward, and shrimp is the most popular seafood in America,” she reports. “[But] our shrimp bowls are the only seafood bowls with Indian flavors.” Elavia adds that there are quite a few frozen Indian meals in trays, “But Americans love eating from bowls.” The Monsoon Kitchens lineup also includes a Butter Chicken Bowl.

Sales in supermarkets, drugstores, mass merchants, military commissaries and select club and dollar stores combined for the 12 weeks ended Aug. 8, according to Chicago-based market research ﬁrm IRI (iriworldwide.com). Percent change is versus the same period a year ago.

Saffron Road also debuts a new line of family-size meals, including two of its most popular existing dishes, Chicken Pad Thai and Chicken Biryani, plus the newly launched Pineapple Fried Rice with Chicken. “While this past year certainly brought tragedy and immense struggles, it also created a revived interest in the universal tradition of gathering around the table for a big family meal,” says CEO Adnan Durrani. “We want to make it not only easy and convenient for families to continue the elevated at-home dining experience…but also share the joy that delicious international foods can bring.”

Naperville, Ill.-based Path of Life (pathoflife.com) is jumping on the multi-serve trend as well with its very first frozen entrée: Organic Grains & Broccoli with Hearty Tomato Pesto Seasoning. The certified gluten- and nut-free plant-based meal offers 12 grams of plant protein per serving. Available now at Costco, each 50-ounce bag contains five 10-ounce single-serve steam bags so consumers can make one or several at a time, depending on their needs. The new meal is part of a larger organic entrée collection that will launch in early 2022, says the company.

Another in-demand frozen entrée attribute that often goes hand in hand with better-for-you is better quality. “Over the years, we’ve seen a shift toward consumers preferring more premium frozen meals,” confirms Priscilla Tuan, senior vp of marketing for Louisville, Colo.-based Sovos Brands, which produces the five-item Rao’s Homemade (raos.com) frozen meals lineup. So instead of following the latest diet and lifestyle trends, “We focus our efforts on ensuring all of our offerings are the highest quality.”

But according to manufacturers, the category doesn’t offer a lot of options for consumers looking for convenient, restaurant-quality meals. “The category offers lots of pasta-based and some rice-based meals, including a lot of bowls looking to replicate fast-casual restaurant offerings. However, there’s not a ton of stuff that’s super-interesting to replace [full-service] restaurant meals or even meals that consumers would take the time to make for themselves at home from scratch,” says Backus of MSK Foods, which created the new Martha Stewart Kitchen collection to help fill that gap.

“I don’t think any of the meals in our line are offered by anyone else,” he continues, citing dishes such as Sicilian-Style Beef Stew and Beef & Stout Pot Pie. “And you won’t find Chicken Cacciatore anywhere else in the frozen department.” But it’s not only about the meals; it’s the quality of the ingredients that go into them and how they’re made, says Backus. For example, many include dark meat chicken, which just isn’t found in frozen meals. And the proteins are slow-cooked using a sous vide process for tenderness. Plus, the flavor profiles are more multi-dimensional than most one-note frozen meals. Also free of artificial colors, flavors and preservatives, “These are restaurant-quality dishes that consumers wouldn’t necessarily take the time to make for themselves,” says Backus. “Even more so now than before the pandemic, that’s what consumers are looking for,” he adds.

While the first iteration of Martha Stewart Kitchen frozen meals were protein and sauce only, customer feedback led the manufacturer to add a starch for a more complete meal. So the next generation of Sicilian-Style Beef Stew will include cheesy polenta while the Chicken Cacciatore will be served over pasta. The company plans to roll out more new products in Q4, but Backus says skillet meals for two “with some tremendous flavor profiles” are also in the pipeline, giving consumers who prefer to do a little more prep the opportunity to “make it their own.”

Cadence Kitchen is also rolling out more “elevated” recipes for the Italian food lover, says Torres-Chad, citing the company’s new Five Cheese Fiocchetti with Beef Bolognese. “Our Lobster Tortellini has already received a great response, so we wanted to replicate that with a fun new pasta shape and meaty Bolognese sauce made with 100% grass-fed beef,” she explains. The company is also introducing its first gluten-free meal: BBQ Macaroni & Cheese. Intended to appeal to consumers with or without celiac disease, the new entrée also taps into growing demand for better-for-you comfort food.

“Consumers seek to combine traditional comfort foods with healthy attributes such as plant-based or gluten-free,” confirms Hedges, who sees opportunity for private brands in particular. “They’ve turned to frozen dinners and en-trees for quick and easy solutions…that offer good flavor but also meet their dietary preferences.” ■