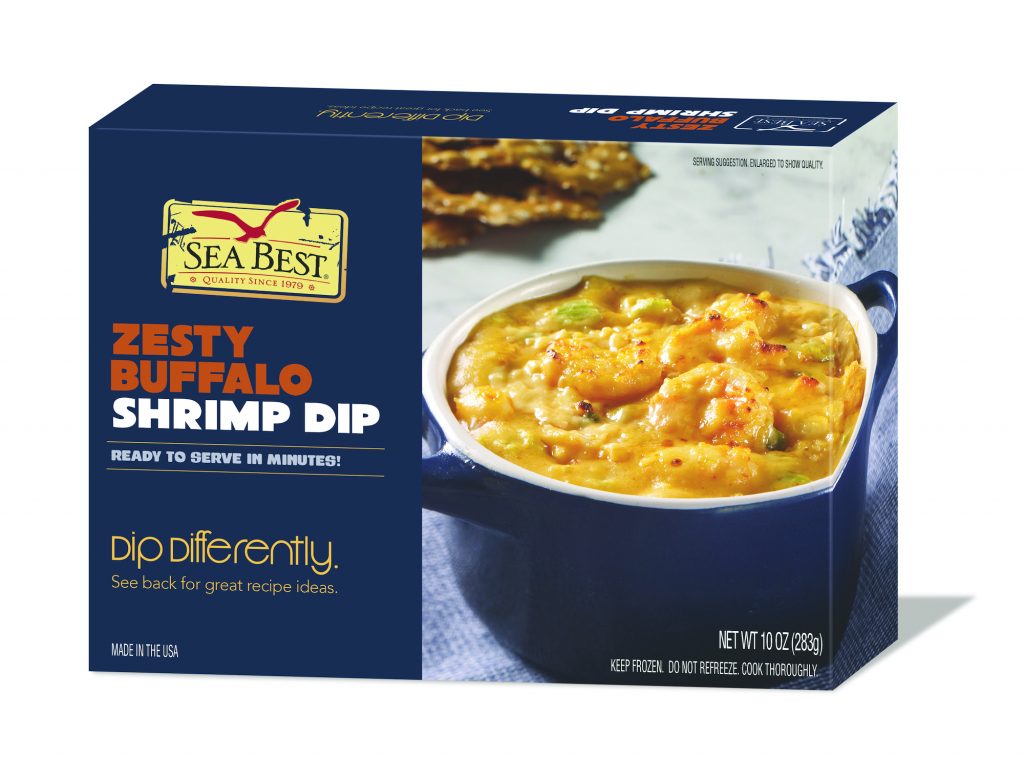 Amid 30% to 40% gains for fresh and frozen seafood, suppliers are launching new products ranging from dips to entrees.

Seafood sales — which realized monthly growth of 30% to 40% throughout 2020 — are still on fire. Frozen seafood sales jumped 33.2% to $1.67 billion for the 12 weeks ending Jan. 24, reports Chicago-based research firm IRI (iriworldwide.com).

The frozen seafood category had the highest sales gains in frozen last year, spiking 35.3%, according to a new report from the American Frozen Food Institute (affi.org) and The Food Industry Association (fmi.org), both in Arlington, Va.

While all species of frozen seafood gained, shrimp had the biggest jump. Raw shrimp sales surged 47.8% to $2.0 billion for the year, while cooked shrimp sales soared 25.0% to $1.8 billion.

Fresh crab sales growth was an “unheard of” 62%, Roerink noted. Still, salmon is the powerhouse of the fresh seafood department, with a 19% increase in sales to $2.2 billion in 2020.

“For decades, people didn’t have the confidence to prepare seafood at home, but the pandemic prompted experimentation,” Roerink notes. High demand for protein variety and seafood’s health halo are prompting more people to see how easy it is to prepare seafood.

‘For decades, people didn’t have the confidence to prepare seafood at home, but the pandemic prompted experimentation.’

Lobster and Shrimp Bites, which include cheese and shallots, are bite-sized versions of “two of the most popular seafood flavors,” SeaPak says in a statement.

SeaPak added the Orange Shrimp because of the popularity of Asian foods. Further, orange sweet and sour sauce is on more menus than cocktail sauce, according to the company. SeaPak’s new wild-caught Coconut Cod is hand-breaded with a lightly-seasoned coconut-flake coating.

Baltimore-based Phillips Foods (phillipsfoods.com), primarily known for crab meat and value-added frozen entrees and apps such as crab cakes, is diversifying with several new products — some featuring crab and some highlighting other species.

Its new line of Sea Burgers includes a Tuna Burger — billed as an on-trend alternative to traditional beef burgers — that’s “made with responsibly sourced, 100% ground yellowfin tuna combined with select seasonings to create a ‘just off the grill’ flavor,” Philips says.

Also new is a Thai-Style Seafood Burger, made with ground shrimp, squid, octopus, and pollock accented by Thai seasonings.

In addition, Phillips is debuting a new value-driven line of frozen seafood products called Waterman’s Reserve. The single-serve items, priced at $5 each, are designed to appeal to customers looking for convenience at a price.

“We have seen retailers use $5 and $10 programs in their bunkers. The thought process was, ‘let’s fit some items in the bunkers that won’t take space away from what we have in the doors,’” says John Baxter, vp of retail/club sales and marketing.

The dips appeal to a wide range of demographics, “which was one of the goals” when executives first researched the category, says Bluzette Carline, director of marketing.

Phillips is also adding dips to its portfolio. Cajun Seafood Dip includes shrimp, clams, octopus, squid, and crab, while Chesapeake Crab Dip features crabmeat in a “rich blend of cheddar and parmesan cheeses with our own seafood seasoning adding a savory kick of Chesapeake-style flavor,” the company says.

Bellingham, Wash.-based Trans-Ocean’s (trans-ocean.com) conventional Seafood Snackers grew 30% last year. While the supplier planned to launch Simply Surimi Snackers — made with wild Alaska pollock and all-natural ingredients — last year, it had to reduce its available SKUs to meet demand of higher-volume products and deal with some labor limitations due to COVID, says Lou Shaheen, vp of sales and marketing.

It is now relaunching the high protein, gluten-free product, which targets the non-GMO, clean-label consumer, he notes.

To help maintain the category’s rapid growth, Trans-Ocean plans to use data and digital technology “to target past and likely purchasers with ads and offers to keep them buying our products,” Shaheen says.

The supplier also contracted with a recipe development firm to create new ways to use surimi seafoods. “This new content will be used by our advertising and social media partners in messaging that is delivered across an array of media platforms,” he adds.

For a brief look at “How the Seafood Shopper has Changed,” check out FMI’s one-minute YouTube video at https://youtu.be/kmbaVUlU24I.

We’ll share additional ﬁndings from the association’s just-released report The Power of Seafood 2021 in future issues.

Consumers’ use of recipe websites has grown significantly and Portland, Maine-based Bristol Seafood (bristolseafood.com) developed its new refrigerated Grab & Go line to appeal to those consumers and others, says Irene Moon, vp of marketing and retail.

“There is a growing group of younger consumers who shop Grab & Go for tonight’s dinner. They are evolving from buying value-added with seasonings and sauces to foodies cooking a restaurant-quality meal at home on their own,” Moon says.

Those shoppers, she adds, “want to know quality, quantity, sustainability, price, and how to prepare it. It’s all on the package.”