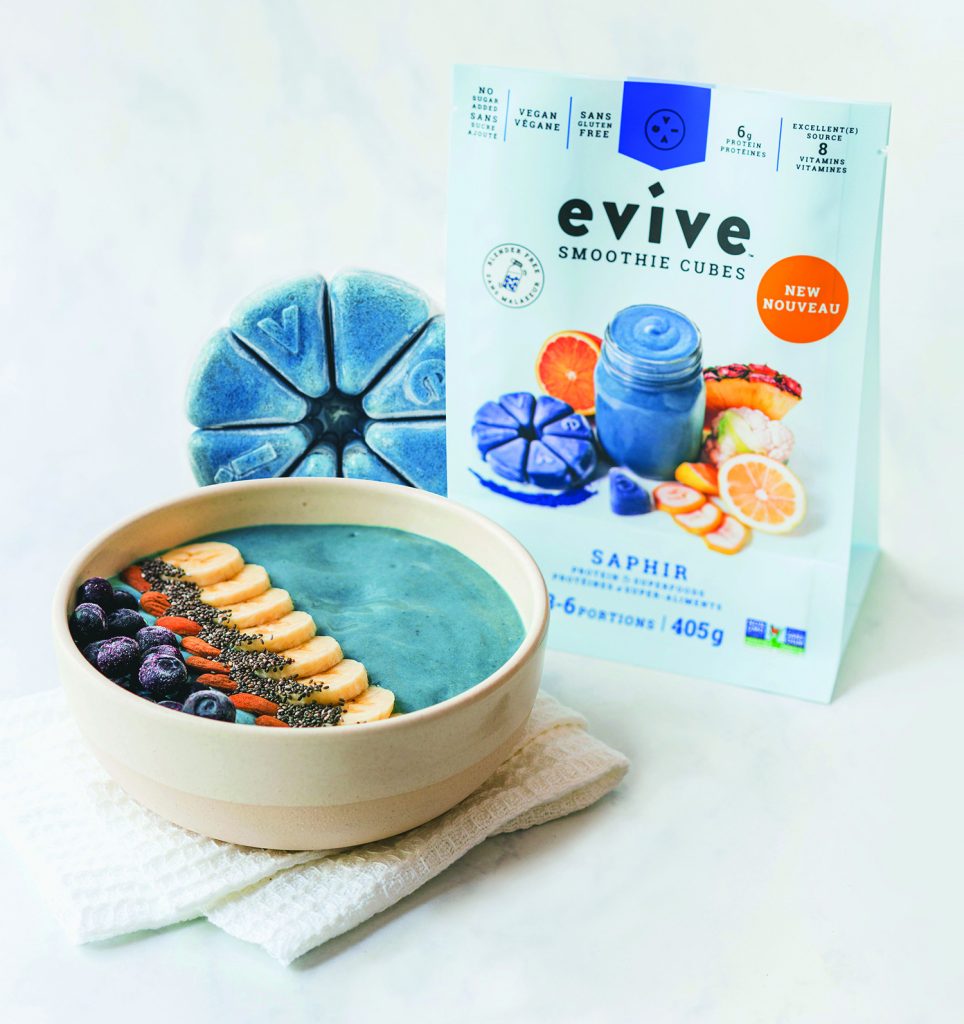 Up 24.1% to $322.28 million across channels, the frozen fruit category continued to outperform the frozen department as a whole during the 12 weeks ended Jan. 24, according to Chicago-based market research firm IRI (iriworldwide.com). Units were up 16.7% and volume, 18.9%, highlighting a pandemic-accelerated shift to better-value big bags that require less replenishment as well as rising prices in the face of tightening supply.

To meet demand for larger packages, Durham, N.C.-based Seal the Seasons (sealtheseasons.com) already moved most of its regionally grown and sold product line from 12- and 14-ounce bags to 32-ounce bags, reports vp of sales Serafina Palandech.

ALL ABOUT THE BLENDS

Although manufacturers say recent growth has been driven largely by core single-fruit SKUs such as strawberries and blueberries, the category had been moving toward convenient, smoothie-friendly blends that incorporate a wide variety of fruits and veggies — a trend that’s likely to resume post-pandemic. However, the newest blends offer a whole host of additional benefits, from functional ingredients and blender-free preparation to interactive packaging and compatibility with various lifestyle diets.

While many blends intended for smoothies come in pre-portioned single-serve packages, sold singly or in multi-packs, Seal the Season’s new Farmer Blends come in 32-ounce packages so consumers can use them in a variety of ways. And unlike the rest of the company’s lineup, the blends include tropical fruits like bananas and mangos not grown in the United States. “There’s huge demand for those fruits,” says Pandalech. “But combining them with regionally grown [domestic] fruits offers them in a more thoughtful way.” Farmer Blends are currently available primarily in the mid-Atlantic and South, though more are expected later this year.

Gresham, Ore.-based Scenic Fruit (scenicfruit.com) is also debuting a new line of blends, though its combos come in 8-ounce single-serve portions in five-count packages for a week’s worth of smoothies. “We have several traditional mixed fruit blends — Strawberry and Banana; Strawberry, Banana and Blueberry; and Mango, Strawberry and Raspberry (all in both conventional and organic) and Pineapple, Mango and Banana (conventional only) — but we also offer a less traditional Organic Kale, Avocado, Pineapple and Banana blend,” reports sales and marketing vp Josh Scheel.

Other manufacturers are adding even more exotic fruits to their blends, particularly on-trend superfruits like acai and pitaya, aka dragon fruit. For example, Guaynabo, P.R.-based Campoverde USA (campoverde.com) recently debuted a ninth variety, Exotic Indulgence, of its all-natural, no-sugar-added Fruit & Veggie Blenders that combines dragon fruit, pineapples, mangos and cauliflower rice — another increasingly popular smoothie ingredient. “Consumers have become increasingly aware of the benefits of fruits and vegetables as natural boosters of their immune systems,” says marketing manager Eldred Resto Donis. However, many manufacturers are taking their smoothie kits up a notch with a variety of other superfood ingredients.

“It’s not enough to just offer a mix of basic fruits and veggies,” says Alicia Lahey, vp of sales for North America at Montreal-based Evive (evivenutrition.com). “Ingredients that have a purpose or key functional benefit…help consumers get more from healthy eating.” Along with unique fruits and veggies, she explains, add-ins like spirulina, plant-based protein, baobab, shiitake, moringa, chlorella, turmeric and others offer “incredible functional benefits.”

Last year, reports Lahey, Evive launched a Viva smoothie variety featuring dragon fruit, cauliflower, strawberry and hemp seeds along with its signature veggie and protein mix, creating a “powerhouse antioxidant.” This year, the company introduces Saphir, a “tasty summer smoothie” reminiscent of lemonade whose blue color comes from superfood blue spirulina mixed with pineapple, cauliflower and mineral-rich baobab. But unlike other smoothie kits, the single-serve Evive lineup is pre-blended, saving precious time on busy mornings. Consumers pour the cubes into a bottle, add the liquid of their choice and shake — no blender required. “Evive pre-made smoothie cubes help people who remained at home during the pandemic both elevate and simplify their breakfast and snack times,” says Lahey.

Manufacturers say all of those attributes are in-demand, but with organic supply still tight —and prices high — some are growing faster than others. For example, reports Palandech, sales of natural frozen fruit are up 103.6% while sales of products labeled non-GMO are up 179.9%. Other attributes on the rise include no pesticides, sustainably farmed, fair wage and USA- or, better yet, locally grown, the latter of which is finally starting to build a presence in the frozen set.

“The majority of frozen fruit sold in the U.S. is imported from other countries where there’s no transparency around growing processes — and they’re certainly not certified non-GMO,” says Pandalech. But it doesn’t have to be that way. For example, “Washington state grows the best dark sweet cherries, but most of the frozen ones sold there are sourced from Turkey.” Seal the Seasons is looking to change that. “By offering consumers the opportunity to ‘buy local’ at a higher price per ounce than other branded items, grocers can grow total frozen fruit sales,” says Pandalech, citing category gains of up to 22% in retailers that carry Seal the Seasons. The company recently added four California-grown SKUs to its lineup, including Blueberries, Strawberries, Sliced Peaches and Berry Blend, she reports.

Sales in supermarkets, drugstores, mass merchants, military commissaries and select club and dollar stores combined for the 12 weeks ended Jan. 24, according to Chicago-based market research ﬁrm IRI (iriworldwide.com). Percent change is versus the same period a year ago.

While drinkable smoothies are still the No. 1 use for frozen fruit, smoothie bowls are catching on as well. In fact, reports Mintel, between 2017 and 2019, smoothie bowl consumption grew at a faster rate than smoothie consumption, prompting big players like Dole, Kind (like the bars) and, most recently, Sambazon to introduce convenient pre-made versions. The newest entry in the segment comes from Paramount, Calif.-based Tattooed Chef (tattooedchef.com), which rolls out four gluten-free, no-sugar-added blends: Organic Acai, Cold Brew and Dark Chocolate, Organic Raspberry Kombucha, and Pitaya, all of which come with a separate pack of granola.

But pre-made frozen smoothie bowls do have some drawbacks. Those that include granola and other toppings often require additional ingredients (sugar, dairy, fillers, etc.) to prevent them from freezing solid while those without them that do freeze solid have to be microwaved or thawed out, explains Austin Patry, co-founder of Dallas-based Rollin’ n Bowlin’ (rollinnbowlin.com). To overcome those challenges and also offer consumers some flexibility, the company developed a unique, ready-to-blend product that can be used to create either a traditional smoothie or a bowl depending on how much liquid is added to the pouch (there are fill lines for both options). The dairy-, gluten- and soy-free vegan collection includes nine no-sugar-added flavors with fun names like Don’t Kale My Vibe and Lime Feelin’ Good that feature on-trend ingredients such as cold brew coffee, lime juice, pitaya, acai, starfruit and nut butter.

“Nearly every bag in the frozen fruit section looks the same: pictures of fruit with a generic name like ‘Tropical Breeze,’” says Patry, who believes better branding will help sustain category gains post-pandemic. Borrowing a page from the ice cream segment, Rollin’ n Bowlin’ is also preparing to roll out a couple of seasonal offerings that can help create a little excitement in the set, especially during non-peak seasons.

What else can retailers do to keep frozen fruit sales humming? For starters, give the category more space and then organize it by product type (organic, bulk, smoothie kits, etc.) so consumers can more easily find what they’re looking for, answers Houde. Proper signage — “Frozen Fruit” not “Toppings” — can also make a big difference, she adds.

Lahey suggests retailers reduce duplication to make room for more unique products that can attract new users to the category. In many stores, “There are multiple versions of frozen strawberries, blueberries, pineapple, etc.,” she explains. But when it comes to simple fruits and mixes, “One private label and one branded option is enough. Consumers are looking for innovation and variety, and they don’t see enough of that in frozen fruit.”

But according to Scheel, tight supplies through the remainder of 2021 mean innovation may have to wait until next year. Right now, “Manufacturers are still trying to get caught up on core items.” As a result, he continues, retailers may want to focus on top movers — and re-evaluate the bottom tier, which often represent the biggest headaches. “If prices on slow movers are up 20%, 30%, even 50% in some cases, it might be time to discontinue them.”