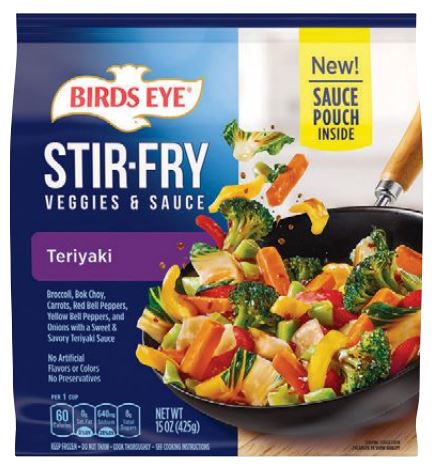 Total sales shoot up 10.7%, but pre-sauced and -seasoned veggies and healthy swaps drive the most growth.

The growing popularity of plant-based diets has turned brands like Beyond Meat and Impossible Burger into household names. But for many consumers, the shift isn’t just about reducing meat consumption; it’s also about eating more vegetables. Combine that with a global pandemic that favored frozen over fresh, and you’ve got a perfect catalyst for category growth. As a result, sales remain elevated even nine months in. During the 12 weeks ended Dec. 27, reports Chicago-based market research firm IRI (iriworldwide.com), plain veggie dollars were up 10.7% to $740.76 million across channels, with squash/zucchini (+15.9%), broccoli (+14.6%) and other plain vegetables (+13.3%) leading the way. (The much smaller prepared vegetable category, which includes more heavily sauced and crumb-topped products, posted a 9.4% gain to $48.57 million).

But within the core plain veggie category, manufacturers say value-added items (+13.8%), including lightly sauced and seasoned products as well as “carb swaps” like riced cauliflower and zucchini spirals, are driving the most growth. Thanks in part to pandemic “cooking fatigue,” explains Melanie Greben, manager of consumer insights at Chicago-based Conagra, maker of the Birds Eye (birdseye.com) lineup, even lower-income consumers traded up to more premium, value-added offerings during the past several months. For many, she adds, a quick, healthy solution is worth the extra dollar or two. (Higher price points and better margins on specialty items are good news for retailers, too.)

However, the fact that private label veggies continue to outgain national brands suggests that consumers are still looking for value where they can find it, says Bob DiNunzio, director of business development at Stamford, Conn.-based Daymon. As a result, he continues, “Retailers should get ahead of the curve on private brand plant-based innovation because they are well-positioned to continue leading the frozen vegetable category.”

National brands aren’t making it easy. In fact, category leaders have responded to evolving consumer needs with dozens of unique new frozen veggie SKUs — and the innovation pipeline shows no signs of slowing.

Among the most significant trends driving new product development this year is the return to in-home dining. From 2019 to 2020, the percentage of lunches

and dinners consumed at home grew 10 and 15 percentage points, respectively, reports Birds Eye brand director Melissa Walters. And instead of eating alone, consumers are eating with their families (20% more often than in 2019). To make it easier to feed a family at home, she reports, Conagra is rolling out family-size versions of its top-selling Veggie Bake side dishes and Oven Roasters pre-seasoned sheet pan veggies. It will also add two new Oven Roasters flavors: Zesty Ranch Broccoli and Parmesan Peppercorn.

Two other macro trends guiding development of new innovation include what Walters refers to as a “skills gap” plus the introduction of bolder, more modern veggie dishes at restaurants, especially those inspired by global cuisine. “When consumers go out to eat they tend to order more elevated, prepped veggies that are roasted and sautéed,” she explains. But when they prepare veggies at home, they boil them in a pot or steam them in a microwave. And they definitely don’t know how to incorporate those on-trend sauces and seasonings. “So there’s a skill gap — and likely a time factor as well — between how consumers want their veggies prepared and how they actually prepare them,” says Walters.

Birds Eye answers both of those needs with two new product lines. One-step Skillet Sides featuring “perfectly paired” sauces are offered in four flavors: Sesame Garlic Broccoli, Balsamic Brussels Sprouts, Garlic and White Wine Mushrooms and Garlic Butter Green Beans. Meanwhile, Stir Fry Veggies & Sauce (in both Teriyaki and Sesame Garlic flavors) come with enough sauce to coat not only the veggies but whatever rice or protein a consumer may choose to serve with them. “Asian cuisine is a large and growing trend with over 14 billion eating occasions annually,” says Walters. “And stir fry is the No. 1 homemade dish. We just made it more convenient.”

Convenience is also on the menu at Green Giant (green giant.com), owned by Parsippany, N.J.-based B&G Foods. But according to brand director Kristen Thompson, the company’s new Simply Steam line extension, Made with Dash Salt-Free Seasoning, features a healthy twist. Although consumers have incorporated the company’s plain riced and spiralized vegetables into a variety of dishes, she explains, sometimes they want pre-seasoned meals that they can get on the table quickly. But in exchange for convenience, they often have to sacrifice healthfulness. “The expansion of our iconic Simply Steam line offers a new convenient way for consumers to enjoy seasoned, flavorful steamed veggies without added salt,” says Thompson. “They fill a gap in the category.” Available varieties include Garlic & Herb Vegetable Medley, Lemon Pepper Vegetable Medley and Southwest Chipotle Sweet Corn Blend.

While pre-sauced and seasoned veggies are grabbing headlines, the category is also seeing an influx of new forms and formats. While riced cauliflower and veggie spirals are commonplace now, the next wave of new items includes healthier alternatives to popular appetizers and sides (think cauliflower wings, cauliflower breadsticks and tempura-style veggies). To complement the Veggie Tots it debuted in 2016, Green Giant recently rolled out both Veggie Fries (Cauliflower Ranch with Bacon, Broccoli & Cheese and Zucchini Garlic & Parmesan) and Veggie Rings (Cauliflower French Onion and Cauliflower Three Cheese with Bacon), reports Thompson, citing an effort to “snack smarter.”

Clearly, cauliflower is still the go-to veggie for R&D departments, who’ve used it to create healthy swaps for just about everything (cauli steaks, anyone?). But even straight frozen cauliflower is getting a “more modern” upgrade. “Rainbow cauliflower is a big trend in fresh but there are limited offerings in frozen,” says Walters. Not only does new Birds Eye Steamfresh Rainbow Cauliflower offer a more convenient alternative to fresh, she adds, it’s also the first branded offering to feature four colors.

Another fresh veggie attribute that’s gaining traction in frozen as well is locally and regionally grown products. Durham, N.C.-based Seal the Seasons (sealtheseasons.com) pioneered the concept of selling frozen fruit grown in a particular region only in that same region, giving frozen food consumers a way to support local farmers. The company recently expanded the model to the frozen vegetable category as well, says founder and CEO Patrick Mateer, citing plans to launch a “top secret” frozen veggie innovation “that focuses on locally grown convenience” in Q3 and Q4. “Beyond the consumer appeal,” he continues, “locally grown frozen produce offers much shorter supply chains that can react to swings in demand” — like, say, during a pandemic. In addition, says Mateer, premium locally grown veggies can be offered at a higher price point than many legacy brands, giving retailers an opportunity to grow category dollar sales.

Another major frozen veggie manufacturer, Bells, Tenn.-based Pictsweet (pictsweetfarms.com) recently jumped on the home-grown trend as well. Although its products aren’t necessarily sourced regionally, they’re now “100% grown on American soil,” which 87% of consumers say they prefer, according to the company. The newest addition to its line is restaurant-style Vegetables for Grilling, a category first that comes with its own grilling pan.

Another trend to watch for is growing demand for veggies grown using regenerative agriculture techniques, says Sam Dennigan, founder and CEO of New York-based Strong Roots USA (strongroots.com), which prioritizes both sustainability and “farm to freezer” production methods. He also predicts growing demand for more functional, immunity-boosting blends that fit personal nutrition goals. But the biggest change Dennigan sees for the category is veggies that taste like, well…veggies. Although he couldn’t be specific, “We’re on track to introduce an exciting new product that caters to consumers seeking plant-based that doesn’t pose as faux meat, dairy or eggs,” says Dennigan, citing opportunities in the meal replacement space. “Consumers don’t need plant-based alternatives that look and taste like non-veggie foods in order to enjoy them. We believe plant-based can taste like veggies and still be delicious.”

He adds, “Frozen veggies will finally be able to be what they are without posing as something else.” While it’s too soon to tell what Strong Roots is planning, brands like Green Giant, Healthy Choice and Tattooed Chef have already introduced veggie bowls. Meanwhile, companies like Yaya’s Garden offer veggie-centric frozen entrees such as Greek Stuffed Vegetables and Greek Baked Eggplant.

VEGGIE MERCHANDISE BASED ON USE