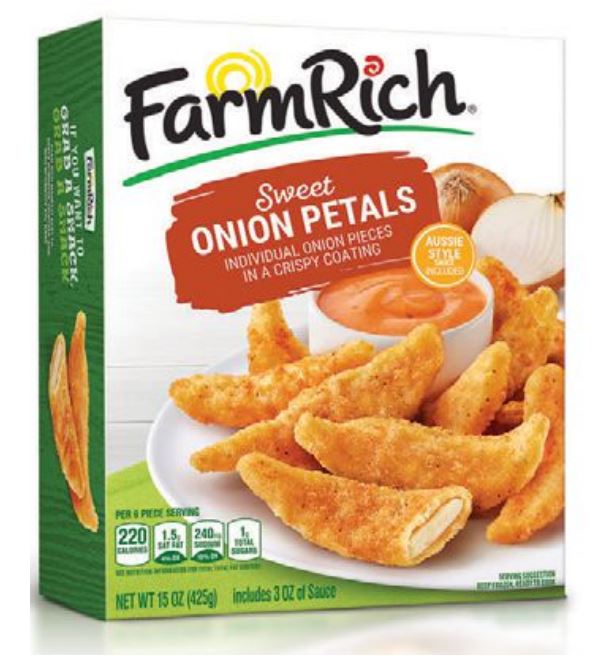 Whether between meals or as a meal, frozen snacks and apps are consumers’ go-to choice for in-home dining.

A new report from The NPD Group reveals that not only are Americans snacking more between meals than they were five years ago, the percentage of meals at which snack foods were consumed jumped from 21% in 2015 to 26% in 2020. It comes as no surprise, then, that sales of frozen snacks and appetizers were up 25.2% during the 12 weeks ended Dec. 27 to $662.36 million, according to Chicago-based market research firm IRI (iriworldwide.com).

Already on the rise pre-pandemic, “Hot snacks became the go-to category among consumers during the COVID-19 crisis because of their abundance of meal possibilities (i.e. flexibility), convenience and value,” says Michael Bierbach, senior associate manager for top-seller Totino’s (totinos.com) from Minneapolis-based General Mills. He adds that “many brands have shifted to larger package sizes and are seeing growth because of it,” thanks to expandable consumption in the category.

The newest addition to the Totino’s lineup, Takis Fuego Mini Snack Bites, helps meet growing demand for bold, ethnic flavors. “We didn’t see a lot of spicy options in the frozen aisle…and we saw a ton of buzz around Takis Fuego [tortilla chips] and their signature chili lime flavor,” explains Bierbach. “So why not combine two snacks that people love — Totino’s pizza rolls and Takis?”

Another familiar name entering the frozen aisle for the first time comes from the folks at New York-based Marquee Brands, which recently launched the Martha Stewart Kitchen (marthastewartkitchen.com) label. Although the initial wave of 24 new items also includes frozen side dishes and desserts, there are three frozen appetizers: Tomato Tartlets, Pigs in a Blanket, and Uncured Bacon, Onion & Cheese Tarts. An additional 39 Martha Stewart Kitchen SKUs are expected to roll out this year, including 14 frozen appetizers. Expected to fill a gap in the category for more unique, upscale offerings, the initial product selections were developed by Stewart and Chef Thomas Joseph based on top recipes in her cookbooks and social media platforms.

Where to find space for the new items? “The key is to evaluate the overall mix and cut back on certain categories that may offer too many similar choices and replace them with unique products not currently offered,” says Tom Gladfelter, vp of national sales and client services manager for Martha Stewart Kitchen distributor MMI Market Solutions, Fort Worth, Texas.

But Bierbach says to proceed with caution. “Growth is concentrated in a few specific segments and brands,” he explains. “So it’s important to regularly rationalize the set and make room only for the most productive items and most incremental innovation.” It’s also worth noting that the top four brands in the space are responsible for 40% of category dollar sales, he adds.

One of those top brands, St. Simon’s Island, Ga.-based Farm Rich (farmrich.com), recently added Sweet Onion Petals with Aussie-Style Dipping Sauce to its lineup, allowing consumers to enjoy a restaurant favorite in the safety of their own homes. Sister brand SeaPak (seapak.com) also rolled out a new snack item recently: Lobster & Shrimp Bites. The cheesy, bread crumb-coated snacks can be prepared in an oven, toaster oven or air fryer, highlighting the importance of compatibility with modern appliances.

Because they’re often eaten solo — and on the run — hand-held entrées didn’t do quite as well as snacks and apps, which are usually shared with the family. Still, the segment managed a respectable 11.4% gain (to $662.96 million) during the most recent 12 weeks. Quality, authenticity and clean labels are driving much of the growth, says Mike Ryan, vp of sales USA for South San Francisco, Calif.-based PJ’s Organics (pjsorganics.com), which recently added Chicken Mole, Adobo Chicken and Carne Asada Burritos to its lineup. Not only do they offer convenience without compromising nutritional value or taste, he says, “The authentic ethnic flavors tap into consumers’ need for adventure” — especially now when most travel isn’t possible. 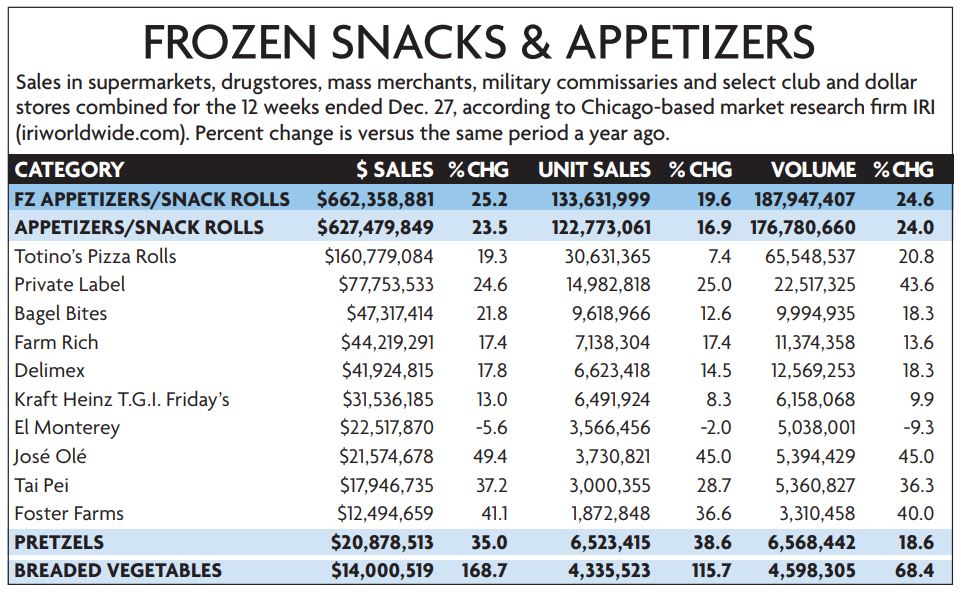