But unlike last year, more indulgent offerings are outgaining better-for-you.

Consumers suffering from “cooking fatigue” but still not comfortable eating out several times a week continue to drive growth of “the original meal kit”: frozen pizza. During the 12 weeks ended Oct. 4, unit sales jumped 9.5% (versus the same period a year ago) to 325.82 million across channels, according to Chicago-based market research ﬁrm IRI (iriworldwide.com). However, dollars shot up 17.8% to $1.29 billion, reﬂecting a 30 cent increase in average price per unit compared to last year that stems partly from a decrease in promotion (volume sold with promotional support fell 5.2 percentage points versus the same period a year ago to 31.5%).

An even bigger driver of higher retails is frozen pizza’s continued “premiumization,” reports Mike Breitenbach, senior director of category management at Bloomington, Minn.-based Schwan’s Consumer Brands (schwanscompany.com), which owns Red Baron, Freschetta and Tony’s. But unlike 2019 when premium growth was driven by better-for-you products, he explains, more “conventional” premium offerings (i.e. indulgent) are leading the charge this year as consumers seek out inexpensive ways to treat themselves.

“Our belief is that brands that best replicate the pizzeria experience at home are the ones that are beneﬁtting most from COVID-19,” conﬁrms Kap Maksian, East Coast sales director for Clackamas, Ore.-based Wild Mike’s (wildmikesultimatepizza.com). As the pandemic rages on and unemployment rises, he adds, “More people will be looking to replace the $15 to $20 pie from their local House of Pizza with a frozen product that tastes just as good but is much more affordable.”

To meet that demand, manufacturers like Schwan’s are focusing R&D efforts on premium, restaurant-quality products that also offer excellent value, reports marketing manager Brian Thompson, citing the company’s new Red Baron Stuffed Crust Pizza as an example. “In the past, frozen pizza consumers have had only one, maybe two brands of stuffed crust to choose from,” he explains. “So we decided to put our own spin on a favorite crust type… but at a lower price point than they’re used to seeing.” Offered in a “fun and different” rectangular shape, the new addition combines a classic interior crust with a melty mozzarella-ﬁlled, breadstick-like outer crust. Available ﬂavors include Pepperoni, Four Cheese and Meat Trio.

Manufacturers’ affnity for new products that feature unique crusts rather than unusual toppings is playing out on the better-for-you side as well. For example, Palermo’s debuted a line of functional hemp seed crust pizzas under its clean label Urban Pie brand. And Livingston, Calif.-based Foster Farms (fosterfarms.com) launched a collection of lowcarb, high-protein pizzas built on a keto-certiﬁed crust made with chicken breast, egg whites and cheese. But the newest alternative crust rollout comes from New York-based Banza (eatbanza.com), which just introduced the “ﬁrst-ever” frozen pizza made with a chickpea crust. 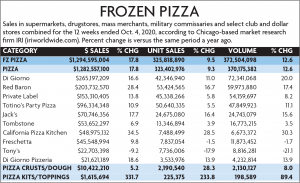 Another new better-for-you crust option, made with butternut squash, comes from Montreal-based gluten-free pizza maker Oggi Foods (oggifoods.com). But according to the company’s co-founders, president Joe Turturici and director of operations Stefano Cataldo, cauliﬂower remains by far the most popular alternative crust — and also serves as the base for the company’s new 100% plant-based, certiﬁed gluten-free lineup. Created in partnership with Beyond Meat and Good Planet Foods, the vegan collection rolled out in January with two SKUs: Americana and Siciliana. Coming soon is the California, topped with Beyond Sausage Italian Crumbles, vegan mozzarella, kale and red onion. A fourth plant-based variety, the Texan, will be built on Oggi’s ﬂagship Neapolitan crust (also vegan and gluten-free) and feature Beyond Beef Feisty Crumbles, vegan mozzarella, bell peppers, jalapenos and red onion.

Despite the buzz around plant-based, not all new entries in the segment are better for you — or the planet — says Nancy Cain, co-founder and owner of gluten-free food manufacturer Against the Grain (againstthegraingourmet.com), Brattleboro, Vt. To give consumers a truly healthy choice, the company recently introduced a 12-inch Veggie Vegan variety (the 10-inch version is called “Cheddar Style”) free of engineered “cheese” or “meat.” “It’s gluten- and grain-free with no vegetable or protein isolates and no cellulose or added ﬁbers to bulk it up,” says Cain. “It really is a vegetable pizza made with ingredients found in your pantry.”

Another uber-clean new addition to the category comes from Edina, Minn.-based Clo-Clo Vegan Foods (clocloveganfoods.com). Free of the top food allergens, the non-GMO, plant-based lineup features a veggie-infused, gluten-free crust and patent-pending cauliﬂower-based cheese “that represents a signiﬁcant advancement in quality, ﬂavor and texture,” says co-founder and vp of marketing Wendy Hinnenkamp, whose daughter Chloe provided the inspiration for the collection.

Due to an auto-immune disease, she explains, Chloe has to avoid a variety of common ingredients. “But she wouldn’t eat the vegan pizzas we tried to serve due to their poor taste and texture,” prompting the Hinnenkamps to partner with award-winning chef Robert Velarde to create a safe, nutritious — and environmentally friendly — frozen pizza that the whole family could enjoy. The new line includes Cheese, Meatless Italian Sausage, Meatless Pepperoni, Margherita and Mediterranean varieties. A plain crust two-pack is also available.

TIME TO FIX THE MIX?

The Clo-Clo collection is currently available at Sprouts, which Hinnenkamp says dedicates 35% of its frozen pizza set to plant-based. “We hope to see more grocers continue this trend,” she adds. However, other manufacturers believe that’s too much space — at least in the conventional channel.

While it remains an important part of the category, “Better-for-you is overspaced,” says Schwan’s Breitenbach, who’d rather see more room for top-sellers. “The bottom 50% of items in the category only contributed 3% to total category growth this year,” he explains. So for at least as long as pandemic-related out-of-stocks persist, “Having the right amount of the right SKUs trumps variety.”

Sales in supermarkets, drugstores, mass merchants, military commissaries and select club and dollar stores combined for the 12 weeks ended Oct. 4, 2020, according to Chicago-based market research fi rm IRI (iriworldwide.com). Percent change is versus the same period a year ago.