Plain frozen veggie sales were up 12.7% during the most recent 12 weeks, but ﬁnding space for new innovations remains a challenge.

Thanks to the introduction of new formats that allow consumers to swap veggies for carbs, the frozen vegetable category was on the rise long before the pandemic struck. But since March when shutdowns forced consumers to prepare most meals at home, sales have been through the roof. Even during the 12 weeks ended Oct. 4, reports Chicago-based market research ﬁrm IRI (iriworldwide.com), plain frozen veggie dollars were up 12.7% to $622.84 million across channels after the usual summer slump failed to materialize this year. Fresh, local produce was as abundant as ever, but consumers still making fewer trips to the supermarket continued to opt for frozen varieties that would hold them over until their next visit. Plus, many invested in secondary home freezers that allow them to stock up. So if you’re not using multiples pricing — no promotion required — you ought to at least consider it (assuming you’ve got adequate stock). 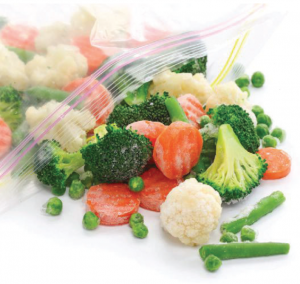 Keeping core SKUs in stock is key to meeting increased demand during the pandemic. But consumers who want to get in and out quickly also appreciate a well-organized set. Historically, however, the frozen veggie section has been hard to shop. Pusher systems that keep bags upright and front faced are ideal but require some investment; shelf ready cases offer many of the same beneﬁts with few costs — and some solid labor savings. What are you doing to make your set easier to shop?

Lack of space for all of the new products in the category represents another persistent problem. Many manufacturers believe the segment deserves more real estate, but in the short term endcaps not only provide additional merchandising space but also attract the attention of consumers who only shop the perimeter. If they like what they see, they’re likely to travel down the aisle in search of more. In addition, endcaps are a great place to cross-merchandise frozen veggies with complementary items, especially those that can be combined to create an easy meal solution. Here’s your opportunity to position veggies as not just a side dish but a versatile ingredient that can be used in all kinds of recipes, including those that can be prepared in on-trend appliances like Instant Pots and air fryers. Of course, recipes, online demos and pairing tips can help in that regard, too.

If endcaps aren’t your thing, what about portable freezers in, say, the fresh meat section where you’re likely to pick up an impulse sale? The U.S. market may not be ready for that just yet, but manufacturers who’ve done it in Europe say it works. “People just think about frozen vegetables differently when they see them in a new place,” says one.

Another way to save space is to reserve the frozen set for vegetables meant to be used as…well, vegetables. So put cauliﬂower pizza crust with the other frozen pizza crusts, cauliﬂower wings with frozen appetizers, cauliﬂower breadsticks with frozen bread, plant-based bowls with frozen entrees, etc. That way, there will be plenty of room for all of the other new frozen veggie offerings, whether intended for the stovetop, microwave, oven or, most recently, grill. You’ll also need an ample assortment of non-GMO, gluten-free and organic offerings as well as those high in protein, low in salt or made with functional ingredients — especially immunity boosters. But be sure to call them out with shelf tags (Kroger’s “Live Naturally” leaves are a good example).

Consumers are also very interested in where their food comes from. In fact, 87% say they prefer American-grown products, so make sure your assortment includes an ample selection of veggies and blends made in the USA. Though not as common in frozen as fresh, locally grown products are even more popular. But again, be sure to highlight them with shelf tags or signage. If you can include some background on a particular farm or grower, all the better.

Signage that educates consumers around the many beneﬁts of frozen veggies — nutrition, peak freshness, value, ease of preparation, reduced waste, etc. — can also help win over the holdouts.

While some manufacturers would like to see frozen veggies closer to the front of the store or, better yet, alongside fresh produce, one easy change retailers can make is to place frozen vegetables adjacent to frozen fruit, creating a large frozen produce (or “froduce”) section.