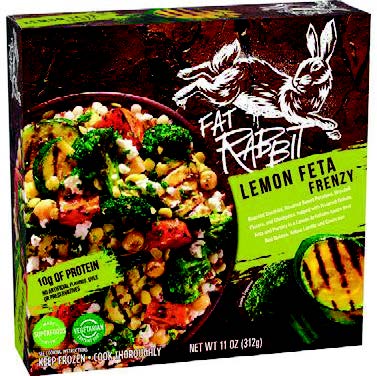 Despite double-digit gains in dinner sales, the category didn’t do nearly as well as the rest of the frozen department. A surge of new better-for-you options could help change that.

Dollar sales of frozen dinners and entrees jumped 12.9% to $2.27 billion during the 12 weeks ended Aug. 9 – great under normal circumstances but well short of the frozen department’s pandemic- fueled average of 22.4%. The handheld segment got closest (+17.1%), but the single- and multi-serve subcategories registered gains of just 10.5% (to $1.10 billion) and 12.5% (to $471.12 million), respectively, according to Chicago-based market research firm IRI (iriworldwide.com).

The lackluster performance stems in part from the fact that more than 75% of frozen entrée sales are of products intended for one – often for lunch at the office. But with many consumers working from home, a lot of solo eating occasions have disappeared. Instead, consumers are looking for products that can feed a family, says Morgan Zanotti, co-founder and president of Primal Kitchen (primalkitchen.com), Oxnard, Calif., which was acquired by Kraft Heinz in 2019. Early in the pandemic, she continues, shoppers re-entering a category they hadn’t visited for several years often reached for comfort foods from larger brands. But as the pandemic stretches into its eighth month (and waistlines along with it), “We’ve seen consumers back off the comfort meals and recommit to health and wellness and newer brands” – some of which they sampled for the first time when old favorites were out of stock.

“It’s amazing to see how much brand discovery there’s been since March,” confirms Jack Acree, executive vp at Stamford, Conn.-based Saffron Road (saffronroad.com), whose frozen entrée sales in the MULO channel shot up 71% during the past 24 weeks, significantly outperforming the category as a whole. He believes the category’s numbers “are indicative of a lack of broad clean label innovation” while Saffron Road’s sales reflect its ability to meet growing demand for wholesome, premium quality meals, an emerging trend that’s accelerated since the pandemic

In many ways, “Consumers are more focused on nutrition than ever,” adds Christine Day, CEO of Vancouver-based Performance Kitchen (performancekitchen.com). In fact, “During COVID, immunity health has been a top search term,” she reports. “The pandemic has also brought attention to food-related chronic illnesses such as diabetes, heart disease, obesity and hypertension. Foods that limit sodium and sugar and contain whole grains, fiber and a variety of vegetables are what consumers are seeking.”

Now that it’s clear what consumers want, many manufacturers have answered the call for cleaner, healthier, entrees, especially those compatible with popular lifestyle diets. But during this stressful time, they still crave comfort foods, says Day. In an effort to deliver the best of both worlds, Performance Kitchen recently partnered with award-winning chef Eduoardo Jordan to develop a collection of nutritionally dense Southern soul food dishes featuring plenty of leafy greens for vascular health. Offered under the June Baby label, the eight-SKU lineup runs the gamut from Hoppin’ John and Chicken & Sausage Gumbo to Lamb Stew with Raisins & Wheatberries and Pulled Pork Shepherd’s Pie.

Performance Kitchen also added four new low-carb, keto- friendly meals to its flagship line, including Smoked Paprika Chicken, Coconut Curried Chicken, Creamy Chicken & Broccoli, and Curried Chicken & Eggplant. “We differentiate our low-carb line by including full servings of vegetables, keeping sugar and sodium low – which is a challenge in a category focused on meat, fat and cheese,” says Day. The meals are also a good to excellent source of fiber, without which it’s difficult for the body to process heavy fats (though the meals feature only heart-healthy Omega 3 fats).

To help consumers more easily find better-for-you meals that meet their particular needs, adds Day, Performance Kitchen recently launched “Food is Medicine” branded doors and bunkers with leading regional retailers. “The bunker program has been a very successful replacement for closed salad bars and has allowed us to bring frozen to the perimeter as a meal replacement solution that the consumer can stockpile,” she explains. Each door or bunker includes 28 to 60 items and is divided into categories such as Mediterranean, low FODMAP, gluten-free, dairy-free, vegan, vegetarian and low-carb. There are also classic items like grass-fed lasagna. “Early sales results indicate we’re outperforming the salad bar in sales per square foot,” reports Day.

Another new entry in the low-carb, keto-friendly segment comes from Boulder, Colo.-based Cali’flour Foods (califlourfoods.com), which recently debuted four gluten-and grain-free entrees made with its signature cauliflower crust as a base: Lasagna with Meat Sauce, Vegetable Lasagna, Chicken Enchilada Bake and Vegetable Enchilada Bake. Each contains 15 to 27 grams of protein, 10 to 12 net carbs and 360 calories or less.

Primal Kitchen is also making news in the gluten-free frozen entrees segment, which is growing twice as fast as the non-gluten-free category, according to Zanotti. With that in mind, the Paleo-focused company launched six certified gluten-free, Whole30-approved Paleo entrees last spring, all made with veggies, cage-free dark meat chicken or grass-fed pasture- raised beef and no grains, soy, dairy, refined sugar or artificial ingredients. Zanotti says the Chicken Fried Cauliflower Rice variety already boasts the No. 1 velocity position for a new natural item in the natural channel.

While gluten-free, keto and Paleo meals are all in demand, perhaps the biggest trend in frozen entrees is plant-based. Driven primarily by the growing number of flexitarians, “Sales of packaged meat alternatives grew 13% year over year in 2019, and meat alternatives are 25% more prevalent on restaurant menus,” reports Lindsay Brady, vp and general manager for the Marie Callender’s (mariecallendersmeals.com) brand, part of Chicago-based Conagra’s portfolio. “But incorporating meat alternatives into a favorite recipe can be daunting to a lot of consumers,” creating a huge opportunity for frozen meal makers.

For its part, Conagra recently added vegetarian Chick’n and Be’f Pot Pies made with plant-based Gardein protein to its Marie Callender’s lineup. Both feature the same flaky crust and scratch-made gravy as their real meat counterparts “so people looking to add more plant-based meat alternatives to their diet don’t have to compromise on their favorite comfort foods.”

Plant-based comfort foods are also on the menu at sister company Birds Eye (birdseye.com), which recently expanded its Veggie Made Bowls and Bakes lineup with a new Veggie Made Lasagna featuring vegetable-based pasta sheets. It also launched two new meatless skillet meals (Garlic Chick’n and Chick’n Alfredo) and a meatless B’ef Lasagna, all made with Gardein, under its Birds Eye Voila! label.

Los Angeles-based Cedarlane Foods (cedarlanefoods.com) is also rolling out plant-based versions of some of America’s favorite dishes. Offered under its Simply Plant Powered brand, the protein- rich, vegan- and dairy-free collection includes Lasagna, Enchiladas in Red Sauce and Enchiladas in Green Sauce, all made with vegan beefless crumbles and vegan cheese, plus Lentil Shepherd’s Pie, “a plant-based twist on the classic dish.”

Many new plant-based lineups include popular dishes from around the globe, highlighting continued demand for authentic ethnic flavors. “World cuisine is another fast-tracked trend,” says Saffron Road’s Acree. With travel restricted and restaurant capacity limited, “Meals like ours offer a sense of adventure, connectedness and joy to families that we’re especially proud of.”

He notes that the company’s Thai line has performed well since it was introduced last August, prompting it to add two new meals: Thai Basil Noodles and Thai Red Curry Chicken. Like all Saffron Road products, they’re made with wholesome, high quality ingredients like grass-fed beef and ethically sourced chicken raised without antibiotics – and free of anything artificial. 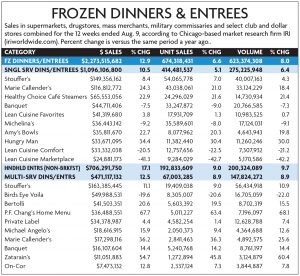 Despite the emphasis on better-for-you and plant-based, indulgence is alive and well! For example, Conagra recently added Double Meat and Double Chicken Bowls to its Hungry-Man (hungry-man.com) lineup, both of which deliver two full servings of meat or chicken (at least 29 grams of protein) plus sides in a 15-ounce meal. “We saw that consumers are becoming more and more accustomed to big portions at restaurants and that high protein offerings are increasingly popular,” explains senior brand manager Kevin Moses.

The company also launched Banquet MEGA Meats Boneless Chicken Strips (banquet.com) in an effort to fill a gap in the single-serve meal category for bold, restaurant- inspired chicken flavors. Available varieties include Buffalo, Kansas City BBQ and Original Classic, all with at least 26 grams of protein.

But even when the meals are more indulgent, manufacturers have made an effort to use the best quality ingredients possible. For example, Aurora, Ill.-based On-Cor (on-cor.com) rolled out three new multi- serve meals last year (Chicken & Broccoli Pasta Bake, Chicken & Vegetable Rice Bake and Chicken Alfredo with Pasta) made with no-antibiotics- added white meat chicken, freshly made pasta and 100% real cheese, reports vp of retail sales Dave Wetherton. A good source of protein, “These products resonate strongly with today’s consumers as they seek to provide their families with wholesome food that is still within their budget.”

Budget-minded shoppers are also top of mind for the Los Angeles-based creator of the new Tiller & Hatch (tillerandhatch.com) lineup. Billed as the first frozen meal brand designed for the electric pressure cooker, the multi- serve meals can feed a family of four for less than $13. New additions include Chili Mac, Italian Chicken Gnocchi, BBQ Beef Chili and Chicken Tikka Masala.

Sales in supermarkets, drugstores, mass merchants, military commissaries and select club and dollar stores combined for the 12 weeks ended Aug. 9, according to Chicago-based market research firm IRI (iriworldwide.com). Percent change is versus the same period a year ago.