The panic-buying surge sent quarterly sales up 38.2%. But manufacturers are determined to keep newcomers to the pizza category in the frozen aisle.

On the rise even before the coronavirus struck thanks to growth in the premium segment, the pizza category saw its sales jump a whopping 38.2% to $1.59 billion during the 12 weeks ended April 19, outgaining the frozen department overall by 10 whole points, according to Chicago-based market research firm IRI (iriworldwide.com).

Pre-pandemic, the category was definitely moving to higher quality, clean label products, both better-for-you (especially plant-based) and, to a slightly lesser degree, indulgent. Driving the shift: Gen Y. “Millennials were responsible for about 50% of the category’s growth in 2019,” reports Brad Smith, VP of marketing for Bloomington, Minn.-based Schwan’s Consumer Brands (schwanscompany.com), which produces the Freschetta and Red Baron brands. As they establish families, he explains, the convenience and kid-friendliness of frozen pizza make it more appealing. But millennials expect a lot from their food, hence the shift to healthier, more premium options.

What’s interesting, says Kap Maksian, retail business director at Clackamas, Ore.-based S.A. Piazza, maker of the Wild Mike’s (wildmikesultimatepizza.com) lineup, is that many shoppers forgot all about nutrition when the panic-buying started, opting instead for more conventional products. “Consumers struggling mentally as well as physically wanted to indulge in a traditional pizza,” he explains. Unable to go out, “They wanted the taste and experience of a ‘pizzeria’ pizza at home.”

Especially early on, however, plenty of shoppers were met with out of stocks on those familiar items and grabbed whatever was available, including newer, better-for-you products they wouldn’t have tried otherwise. “In many ways, the past few months have been a massive ‘national food sampling event,'” says a spokesperson for Arlington, Va.-based Nestlé (nestleusa.com), which produces the top-selling DiGiorno brand. “While a desire for comfort food while stuck at home may have brought them to the frozen pizza aisle initially, consumers have been pleasantly surprised by what they found there: bold, taste-forward recipes and a variety of modern offerings.”

As a result, suppliers that shifted production to high-velocity SKUs in an effort to keep up with demand will almost certainly need to resume manufacture of more niche items once things return to “normal.” Yes, innovation might take a back seat during the short term, says Smith, “But with so many new buyers having entered the category over the last 12 weeks, variety and choice will continue to be important.”

What are some of their options? Let’s start with the indulgent. Milwaukee-based Palermo’s (palermospizza.com) is adding two new flavors to its core Screamin’ Sicilian lineup, including Brazen Buffalo, a buffalo chicken variety long sought by fans of the brand, and Johnsonville Brat Pepper & Onion, created in conjunction with another Wisconsin-based company. “The Johnsonville Brat flavor was developed by the two companies as a way to bring the flavors of a backyard barbecue inside,” says chief product and innovation officer Nick Falluca.

Another new entry in the indulgent segment comes from Nestle, which rolled out DiGiorno Croissant Crust Pizza in April (digiorno.com). Offered in Four Cheese, Pepperoni and Three Meat flavors, it’s billed as the only croissant-style pizza available nationally in the frozen aisle. A hit among consumers looking to treat themselves while quarantining at home, “the product also builds on the popular trend of food mashups,” says a spokesperson.

At the other end of the spectrum, Schwan’s recently debuted a Freschetta Thin Crust lineup (freschetta.com) that offers consumers a lighter, guilt-free option that doesn’t compromise on taste, says Smith. Available flavors include Premium Pepperoni, Five Cheese and Garden Veggie.

Category newcomer Skinny Pizza (skinnyfrozen.com), Roslyn, N.Y., is also focused on the calorie-conscious pizza lover, says sales administrator Elly Goncalves. Its “very thin and crispy” crusts are topped with sauce made with organic tomatoes, real cheese and nitrate- and nitrite-free meats. Available flavors include Mozzarella & Provolone (on a stone-fired, gluten-free stone fired or cauliflower crust) and Uncured Pepperoni (on a stonefired crust), each with no more than 360 calories per half a pie. But Goncalves says to watch for new Skinny products, including plant-based and vegan options as well as keto-friendly crusts.

Another key player in the functional crust category, Montreal-based Oggi Foods (oggifoods.com) offers a superfood line that includes both cauliflower- crust and beet-and-cauliflower-crust varieties. But according to marketing director Anthony Di Cesare, the company plans to add new superfood crusts featuring ingredients like broccoli, spirulina and red lentils in the near future. Whether they’re going keto, vegan or gluten-free, he explains, consumers following healthy lifestyle diets are looking for convenience foods that also meet their nutritional needs. “The latest trend is to incorporate superfoods into products to give consumers a large dose of their daily vitamins and nutrients,” he says.

All three crust types, including gluten-free and whole-grain, are available in the same three best-selling flavors – Uncured Pepperoni Classico, Four Cheese and Veggie Outfit – and that’s part of what differentiates the WisePies line from other better-for you offerings. “Natural pizzas often feature non-traditional toppings like spinach and pesto, but we focused on consumers’ favorite toppings. It’s all clean label – real cheese, real pepperoni, no artificial ingredients – without the ‘healthy’ aftertaste. That’s our niche. It’s a better product but exactly the flavors you want,” says Elliott.

That said, she also appreciates the importance of ethnic and regional flavors with the potential for broader appeal, prompting the creation of two WisePies varieties topped with New Mexico-grown Hatch green chiles. Both are debuting in select Kroger banners this month, reports Elliott.

Brattleboro, Vt.-based Against the Grain Gourmet (againstthegraingourmet.com) is also jumping on the bold flavor trend, adding Cheesy Jalapeno and Bacon & Onion flavors to its gluten- and grain-free lineup. “We noticed that the primary additional topping among our empoyees was hot sauce – lots of it,” explains owner and founder Nancy Cain. “And heat, in general, is in demand, particularly among young consumers.” She adds that while consumers with celiac disease have little choice, “I think others are attracted to the gut-healthy proposition offered by our grain-free pizzas.”

Against the Grain also added a 100% plant-based vegan pizza to its lineup recently. “It’s unique in that it’s topped with a vegan cheddar cheese sauce rather than a cheese substitute,” says Cain. “It’s an interesting alternative to red sauce, and it tastes a lot better.” The new addition comes in both the standard 10-inch as well as a less common (in gluten-free) 12-inch size, which has proven very popular with families during the shutdown, according to Cain.

Of course, one of the most anticipated new products in the plant-based segment is pizza topped with meat substitutes that mimic real sausage and pepperoni. One of the first out of the gate is Oggi’s new vegan pies featuring hot seller Beyond Meat. Built atop hand-stretched cauliflower crusts, the stone-baked pizzas come in two flavors: Americana (with Beyond Beef Crumbles) and Siciliana (with Beyond Sausage Italian Crumbles). Next up, says Di Cesare, is a vegan pepperoni.

After plant-based, the second-biggest trend in the supermarket is snacking, especially in households with kids, prompting some pizza manufacturers to extend their lines into the frozen snack segment. For example, Schwan’s recently introduced single-serve Red Baron Pizza Melts (redbaron.com) that can be enjoyed any time. And Wild Mike’s is rolling out Stuffed Crust Cheezy Bites that recreate the pizzeria experience at home – one bite at a time, says Maksian. The fresh-baked, no-artificial-anything snacks come in two flavors, Original and Jalapeno, and they’re already very popular with kids who begged the company to bring the foodservice product to retail.

While it’s important to offer on-trend pizza products, manufacturers say retailers can’t bring on every new item that’s presented to them, especially in still-emerging segments. “Many innovative SKUs, particularly in the premium and better-for-you segments don’t have the velocity of mainstream SKUs,” says Smith. “So retailers should be cautious about over-shelving innovation with narrower appeal.”

Cain agrees. While premium and super-premium pizza have never done better, that’s no reason for unnecessary duplication of niche items. “Retailers are getting an excellent education right now in what brands and flavors sell out first and which are purchased as a last resort,” she says. Her unscientific observation: It might be more advisable to double-face some brands instead of offering “every veggie crust imaginable.”

One item that perhaps should get a little more space is single-serve pizza SKUs. “More than half of all eating occasions in the U.S. are solo, and we’ve seen significant growth in our single-serve items,” says Schwan’s Smith. “Plus, these items tend to be a lot more productive on shelf as they take up less space.”

Sales in supermarkets, drugstores, mass merchants, military commissaries and select club and dollar stores combined for the 12 weeks ended April 19, according to Chicago-based market research firm IRI (iriworldwide.com). Percent change is versus the same period a year ago. 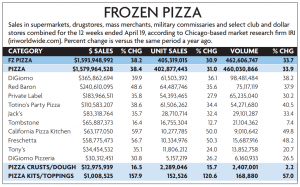