Consumers stuck at home for the foreseeable future stocked up on frozen desserts. Premium, convenient and single-serve options are among their favorites.

When it comes to comfort foods that can outlast even the lengthiest of stay-at-home orders, frozen desserts are near the top of the list. It comes as no surprise, then, that frozen pies (+5.2%), sweet goods (+8.4%) and cheesecake (+17.0%) all saw sales spike during the 12 weeks ended March 22, according to Chicago-based market research firm IRI. But even before the coronavirus surge, the pie and sweet goods subcategories were holding their own, up 0.1% and 0.9%, respectively, during the 12 weeks ended Feb. 23, while the on-trend cheesecake segment had jumped a whopping 11.8%. In all three subcategories, however, dollar growth continues to outpace volume gains, suggesting a continued shift to better-quality premium items.

In the fruit pie segment, for example, total sales were flat to down over the past 52 weeks, but sales of “high retail” SKUs ($10+) jumped 12.5%. Even if the economy doesn’t rebound as quickly as hoped post-coronavirus, Dan Swartz, COO of The Village PieMaker (villagepiemaker.com), Omaha, Neb., believes consumers will continue to opt for premium desserts that mimic homemade. “With people staying close to home and going out to restaurants less, they’ll still gravitate to restaurant-quality products like ours with clean labels and simple ingredients that remind them of happy times.” He says that a new line of 7-inch pies will retail for less than the company’s flagship 10-inch pies, making the upscale desserts more affordable.

“We got a lot of feedback from smaller families and empty-nesters who enjoy our pies but found the 10-inch size too big for just themselves (versus for a party or family gathering),” explains Swartz. Every flavor in the Village PieMaker’s lineup, including a new Pumpkin variety expected to debut later this year, will be available in the 7-inch format, he says.

The first, Confetti Birthday Cake, taps into one of the hottest flavors across retail categories, up 62% this year versus last to $165 million. The second, Chocolate Brownie, builds on the growing popularity of dessert mash-ups. “We saw an opportunity to combine brownies, which have a large and growing presence on restaurant menus, with the No. 1 pie flavor to create a unique – and tasty – new offering,” says Hackett.

Another player in the thaw-and-serve category, Brooklyn, N.Y.-based importer Preferred Food Group, brings premium frozen desserts from Europe’s finest bakeries to U.S. consumers. Made with high quality ingredients like fresh eggs, real cream and high quality chocolate, its portfolio includes: Chocolate Cake with Toblerone, Swedish Almond Cake with Daim, Choco Delish and Lemon Mousse Cake, all from Sweden-based Almondy (almondy.com) and new Toblerone Baked Cheesecake from U.K.- based Vittles Foods (vittlescakes.co.uk). Although the lineup is unapologetically indulgent, it also includes options for consumers seeking GMO-free, gluten- free, vegetarian and vegan desserts. “People who are gluten- or lactose-intolerant don’t always have a lot of great-tasting options,” says Preferred Food Group director Aleksandr Ladyzhensky. “But those attributes are just an added bonus with our desserts. They appeal to everyone.”

Among the newest additions to Preferred Food Group’s portfolio is microwaveable single-serve Toblerone Lava Cakes from Belgium’s Dessert Factory (dessertfactory.be). “I think consumers appreciate the portion control as well as the price point,” says Ladyzhensky. He adds that the company hopes to have a single-serve version of Toblerone Baked Cheesecake later this year.

SOLO CONSUMPTION ON THE RISE

Smaller sizes for more “everyday” use tap into a shift toward more casual, solo consumption of sweet treats, says Hackett. To capitalize on the trend, Conagra launched microwaveable Duncan Hines Gooey Bakes last September. Ready in about a minute, the no-prep, single-serve frozen desserts come in Chocolate Chip Cookie, Double Chocolate Brownie, Butterscotch Oatmeal Cookie and Confetti Sugar Cookie varieties. Already the frozen cookie subcategory’s No. 2 brand (after private label), they were the primary driver behind a 35.9% gain. But watch out for Delizza (delizza.us), Battleboro, N.C., whose new frozen macarons saw its sales shoot up 834.5%, albeit off of a tiny base. Offered in six-flavor 12-count packages, the imported desserts offer something for everyone, says senior vp of sales and marketing Josh Helland.

“Consumers have shifted away from the old standards, and they’re no longer willing to settle for uninspiring options,” he says. “They don’t just want something sweet after a meal, they want to experience something new but in the familiar surroundings of their own homes.”

Sales in supermarkets, drugstores, mass merchants, military commissaries and select club and dollar stores combined for the 12 weeks ended March 22, according to Chicago-based market research firm IRI (iriworldwide.com). Percent change is versus the same period a year ago. Only brands with at least $1 million in sales during the period are listed. 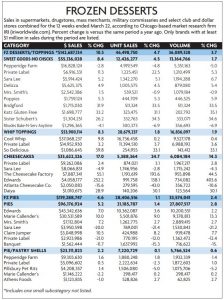