They may not be a big threat to your business right now, but you can learn from some of the things they do really well.

Supermarkets need to take a close look at what convenience stores are doing these days. No, not because C-stores are going to steal away their sales of eggs, milk and ice cream. But because supermarket operators can steal away some good ideas they can use in their own stores.

After all, it was C-stores that put in gas pumps before anybody else did. Or was it gas stations that turned themselves into C-stores? Doesn’t matter. The point is that C-stores led the way on fuel sales, and now gas pumps are sprouting at more and more supermarkets every day.

And come to think of it, C-stores led the way with foodservice and meal solutions, too. They may have started with those day-old hamburgers under 200-watt light bulbs and hot dogs being rolled around in circles on those little heaters, but they’ve come a long way.

Well, at least some of them have. You still can find lots of filthy C-stores with muggers in the parking lot, day-old burgers under the bulb and the sole clerk having a cigarette break out back.

I’m not talking about them. But have you ever taken the time to go to really good C-stores, like QT or Wawa, and study their foodservice operations with an eye to what’s working well? Considered ways you could duplicate or adapt an idea or two, and involve frozen or dairy into that idea in your own stores? Chances are you haven’t.

That’s at least partly because the bad apples give the whole channel a bad name. And even most of the decent C-store chains don’t pay much attention to frozen and dairy. In my book, that’s their loss and our gain. But if the C-store folk ever wake up, they can be dangerous.

You might be able to steal away some of the ideas they use for customer engagement. Down where I live in South Carolina, I’ve become sort of a regular at QT stores (www.quiktrip.com). Can’t say enough good about them.

The $11 billion company is based in Tulsa, Okla., and has more than 700 stores in 11 states. They look to be the dominant C-store in their markets, with high-volume locations. I’ve never been in one that wasn’t busy.

The stores are always clean, and they’ve got several people working in them at any one time. There’s more than one checkout, so you’re in and out quickly, and you don’t feel like you’re going to get mugged while you’re behind a gondola, trying to buy some OJ. I’ve been in full-line grocery stores where there’s less staffing.

Their line of food to go is extensive and well-merchandised, and you can learn about it on Facebook, Twitter, Instagram and their Web site. There’s even an app you can download — I get two or three e-mails a week from them offering a free drink or $1 off a sandwich or whatever. It keeps them top-of-mind without being annoying.

None of this is to say the C-stores are the be-all and end-all. They aren’t. But some of them definitely bear watching, especially as top industry execs play their never-ending game of musical chairs. A year-and-a-half ago, for example, Tad Dickson left as CEO of Harris Teeter and became the chairman of the board over at The Pantry, which runs about 1,500 C-stores under the Kangaroo name. Dickson is a sharp one, and he’s likely to take some grocery ideas and put them to work at The Pantry.

We’ve complained for many years in this industry that channels are blurring. But I’ll tell you one thing — if you want to keep a clear idea of what’s happening in all that blurring, pay attention to your competitors. All of them! 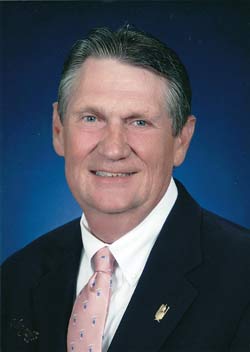 Retailer of The Year – Kroger

Early investment in automated customer fulfillment centers gives the Cincinnati-based Kroger chain a huge head start in the race for e-commerce supremacy. When the pandemic

COVID drove sales through the roof last year, but this year will be different. You’ll need to increase promotion and capitalize on the trend toward