In the third of a five-part series, Todd Hale discusses winning shopping trips through precision marketing against shoppers that matter most.

At the 23rd annual NFRA Executive Conference in Tempe, Ariz., last month, there were discussions in most of the general sessions around opportunities to enhance retailer and manufacturer performance with greater focus on multicultural and generational consumers. The opportunities are clear when you examine population trends and total spending power, but so many companies seem to be struggling to engage one or more of these population segments.

A couple of conference presenters brought up the need to have more granular focus when looking for growth opportunities within generational segments. That is, even within population segments like Millennials and Boomers, there are differences in age, income, health and family status that dictate the need to examine more granular segments to understand shopper demand and respond accordingly with the right offering, merchandising, and messaging. The same could be said for multicultural population segments when you consider diverse countries of origin for Asian, Hispanic and Black households.

Rather than dwell on generational or multicultural shoppers, which are frequently covered by industry trade publications, I thought I would discuss an area of focus that affects all population segments. There has also been a lot of discussion over the past few years about income inequality in the United States and around the world. Despite improving economic conditions, stagnant wages and a shrinking middle class have received part of the blame for lower-than-expected U.S. retailing results. As a result, I’ve been spending quite a bit of time of late examining trends in income and wealth, as well as shopping and buying behaviors across the income spectrum.

SPENDING POWER IMPACTS WHERE WE SHOP 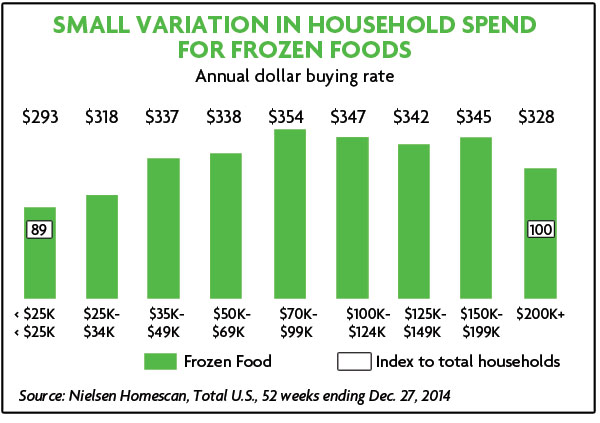 No surprise, Nielsen Homescan metrics illustrate greater spending power as household income rises. That increase in spending power is less about differences in shopping trips than it is about bigger shopping basket dollar rings. Nielsen Home- scan shows households with spending power shop around more. Annually, about the same percentage of low and high income households (defined as those with incomes less than $25,000 and $200,000 or more, respectively) shop grocery stores, mass merchandisers and drugstores, but there are big differences in shopper penetration across other retail channel formats. Warehouse clubs and most specialty retail channels (hardware/home improvement, department, office supply, pet specialty, electronic, liquor, news/book, and toy stores) attract a disproportionate percentage of affluent shoppers, while dollar stores and convenience stores/gas stations attract a greater percentage of lower income households.

SPENDING POWER IMPACTS HOW AND WHAT WE BUY

Purchases on Deal: Nielsen Homescan shows purchases on deal rise with income. But is this demand-driven or are deals more accessible to the more affluent? Direct mail coupons and retail circulars are more likely to be distributed in neighborhoods with greater spending power. Nevertheless, the success of Aldi and Save-A-Lot confirms how shoppers at the lower end of the income spectrum seek retailers that help them manage their spending. The high penetration of smart phones across income levels provides opportunities for other retailers to deliver promotions more precisely and efficiently than traditional paper-based means.

Store Brands Versus Brands: While consumers don’t always do as they say, there is a strong correlation between the attitudinal attachment consumers have for store brands and store brand share, and both fall as incomes rise. Lower store brand share among affluent consumers is actually due to the fact that more affluent households spend so much more on branded items. That is, store brand buying rate increases across households as income rises, and the store brand buying rate among those with incomes of $200,000 or more is actually greater than the rate among the lowest income group. However, the annual buying rate for branded items among those with incomes of $200,000 or more is much greater than the branded buying rate for households with incomes under $25,000. Obviously, retailers can win with store brands among affluent households, and the payoff can be rewarding. However, be careful that you don’t create store brand options at the expense of branded items of interest to your affluent shoppers, which could drive them to a competitor. These findings also suggest opportunities for tiered store brand programs where shoppers can choose between value store brands, national brand equivalents and premium store brand offerings 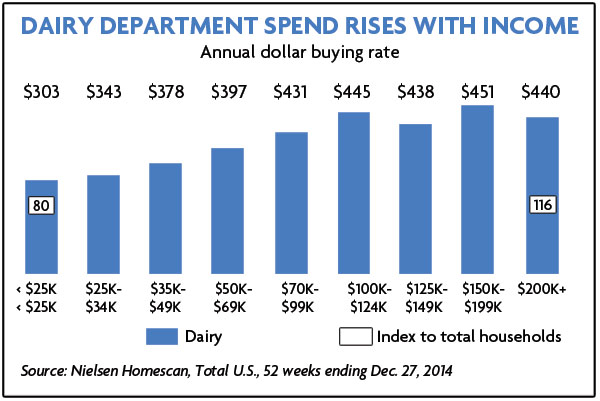 Nielsen measures a small variation in share of spend devoted to the dairy department (ranging from a low of 9.7% to a high of 10.5%) and it peaks among households in the middle. But as noted in many departments, per household dairy department spend rises with income. Those in the lowest income group spend about 80% less than expected on the department, while the most affluent households spend 16% more. So there are opportunities to collaborate with manufacturers to ensure that retailers maximize dairy department per household spend among those with greater spending power.

Category Buying Mix: Nielsen measures diversity in appeal for food category buying at the extremes of income. Fresh produce, yogurt, and spices, seasonings and extracts have much stronger annual buying rates among more affluent households. On the other hand, cereal, frozen vegetables and canned fruit sales rates are fairly consistent across income groups. Note that the categories with strong appeal to the more affluent have been exhibiting strong growth in retail sales, while sales growth for the other categories have been soft or on the decline.

Winning or driving growth in dynamic times requires companies to look for opportunities to connect with shoppers that matter most to their retail banners and/or brands. Who are the shoppers that matter most to your company —near- and long-term – and are you digging deep enough to uncover the insights needed to identify opportunities to be engaged with them?

If your retail banner or brand is not connected today with shopper segments that will drive future growth, then you need to start looking for ways to connect with them via existing offerings or develop new offerings that meet their demand. Those who fail to make this link will likely not be around for the long haul!

Retail insights thought leader Todd Hale is the former senior vp of consumer and shopper insights at Nielsen and now serves as principal at Cincinnati-based Todd Hale, LLC. A popular conference presenter, he also speaks at large and small company events — everything from board meetings to sales meetings to planning sessions. Todd’s discussions include the latest consumer and retail trends with insights on how manufacturers and retailers can enhance both near- and long-term market performance. He can be reached at [email protected]
View all posts by Todd Hale →
Value-Channel Vegetarian
SLOTTING IS HERE TO STAY, BUT… 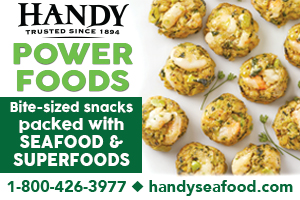 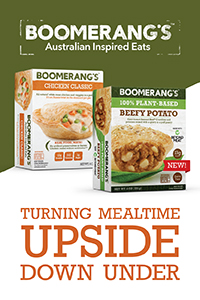 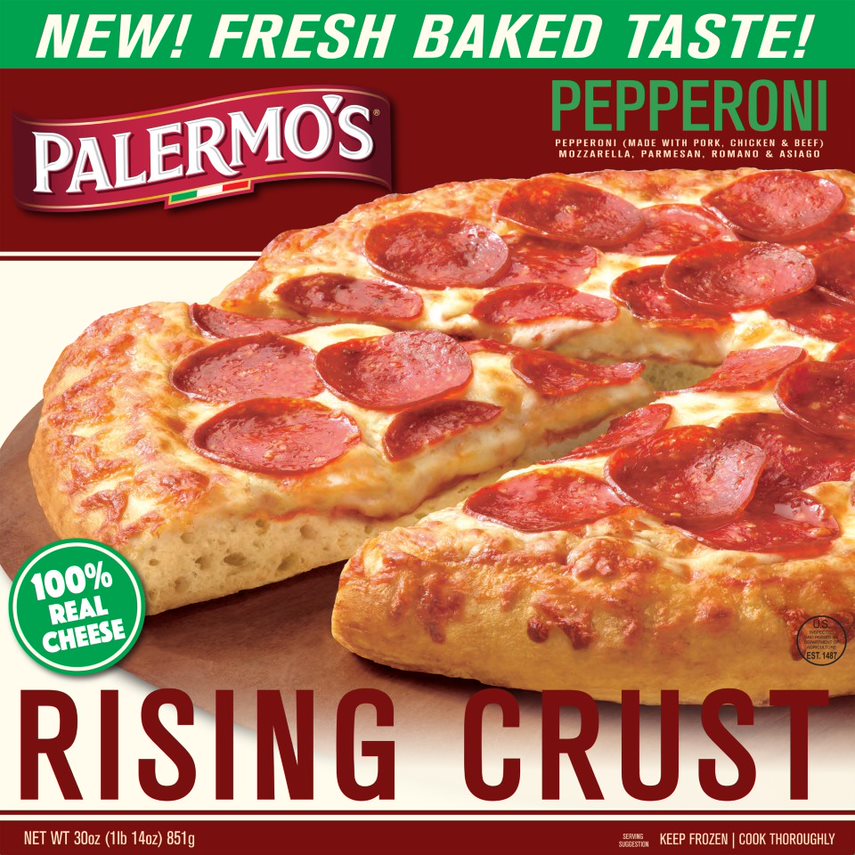